My Mobile is sending me to Hell!

I was once listening to a lecture by Mufti Ismail ibn Musa Menk in which he mentions mobiles phones and its (advantages and) Disadvantages.

He mentioned some great points about the mobile devices but at the same time said that these devices now contain ample evidence and information for us to ponder over. We now have a small device in our pockets with ALL the knowledge we would need to be a better and succesful Muslim.

Their hearing (ears) and their eyes and their skins will testify against them as to what they used to do.

(They will say: "Allah has caused us to speak -- as He causes all things to speak, and He created you the first time,)

Al-Hafiz Abu Bakr Al-Bazzar narrated that Anas bin Malik, may Allah be pleased with him, said, "The Messenger of Allah laughed and smiled one day, and said:

(Will you not ask about why I laughed)'' They said, "O Messenger of Allah, why did you laugh'' He said:

I was amazed at how a servant will dispute with his Lord on the Day of Resurrection. He will say, "My Lord, did You not promise me that you would not treat me unjustly'' Allah will say, "Yes.'' The man will say, "I will not accept any witness against me except from myself.'' Allah will say, "Is it not sufficient that I and the angels, the noble scribes, are witnesses'' These words will be repeated several times, then a seal will be placed over his mouth and his organs (or limbs) will speak about what he used to do. Then he will say, "Away with you! It was only for your sake that I was arguing!'')'' It was recorded by him and Ibn Abi Hatim. It was also recorded by Muslim and An-Nasa'i. Ibn Abi Hatim recorded that Abu Burdah said that Abu Musa said, "The disbeliever or the hypocrite will be called to account and his Lord will show him his deeds, but he will deny them and say, `O Lord, by Your glory, this angel has written about me something that I did not do.' The angel will say to him, `Did you not do such and such on such and such a day in such and such a place' He will say, `No, by Your glory O Lord, I did not do it.' When he does that, a seal will be placed over his mouth.'' Al-Ash`ari, may Allah be pleased with him, said, "I think that the first part of his body to speak will be his right thigh.'' Allah's saying:

(And you have not been hiding yourselves (in the world), lest your ears and your eyes and your skins should testify against you;) means, their organs and skins will say to them, when they blame them for testifying against them, `you did not hide from us what you used to do, on the contrary, you openly committed disbelief and sin, and you claimed that you did not care, because you did not believe that Allah knew about all your deeds.' Allah says:

(and you have become of those utterly lost!) means, `in the place of Resurrection, you have lost your own selves and your families.' Imam Ahmad recorded that `Abdullah, may Allah be pleased with him, said, "I was hiding beneath the covering of the Ka`bah, and three men came along -- a man from the Quraysh and two of his brothers-in-law from Thaqif, or a man from Thaqif and two of his brothers-in-law from the Quraysh. Their bellies were very fat, and did not have much understanding. They said some words I could not hear, then one of them said, `Do you think that Allah can hear what we are saying now' The other said, `If we raise our voices, He will hear it, but if we do not raise our voices, He will not hear it.' The other said, `If He can hear one thing from us, He can hear everything.' I mentioned this to the Prophet , then Allah revealed the words:

(And you have not been hiding yourselves (in the world), lest your ears and your eyes and your skins should testify against you) until;

(of those utterly lost!) This is how it was recorded by At-Tirmidhi.


What does this have to do with me and my Mobile?

report post quote code quick quote reply
+2 -0Like x 1Informative x 1
back to top
Actions are judged by intentions, so each man will have what he intended.
ابو محمد
View Profile

How many of us download every Islamic App on the market and then actually use them?

How many of us have actually read the Quran using the app sitting in the least used section?

How many of us have downloaded the Salah timetable app and actually pray on time? Or even pray at all!

How many of us have an Alarm clock but don't set it for Salah?

How many of us have a qibla director but don't pray?

How many of us have social networking/email Apps that we use every few minutes to keep us in touch with the Dunya and feed the Nafs?

How many of us are guilty of this? MOST OF US, INCLUDING MYSELF. May Allah Protect us all from this.

report post quote code quick quote reply
+2 -0Like x 1Agree x 1Informative x 1
back to top
Actions are judged by intentions, so each man will have what he intended.
ابو محمد
View Profile 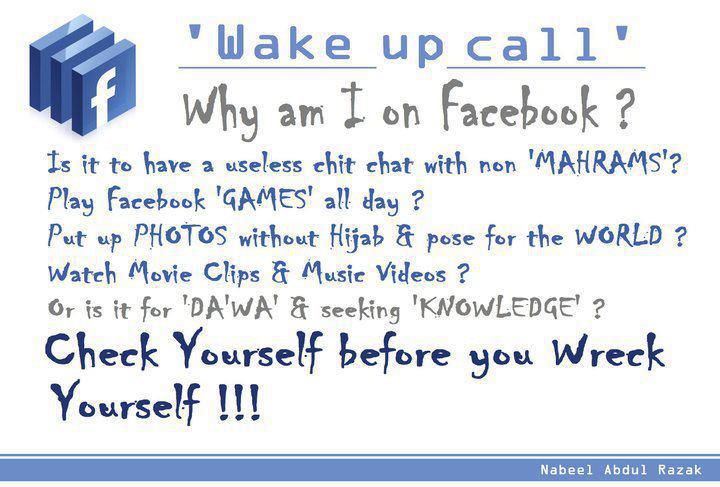 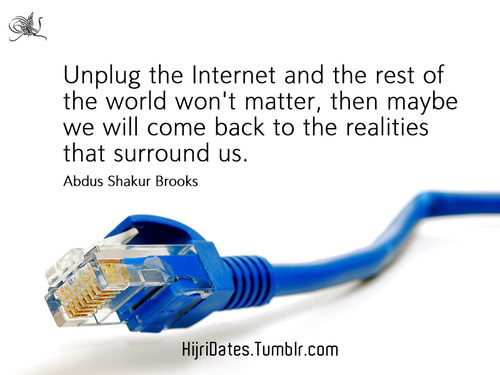 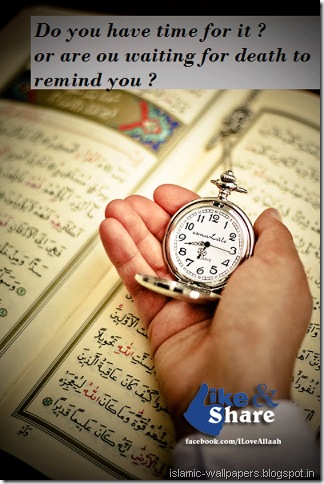 report post quote code quick quote reply
+2 -0Like x 1Winner x 1
back to top
Actions are judged by intentions, so each man will have what he intended.
ابو محمد
View Profile

#4 [Permalink] Posted on 23rd August 2013 13:08
Additional reading:
Your exposure and evidence AGAINST YOU
LOL
Facebook

#5 [Permalink] Posted on 23rd August 2013 15:23
Sweetmuslimahk1 wrote:
UNCRONTOLLED USE OF PHONES AND DEVICES

When we become enslaved by social networking sites or applications, we stand to lose the real people who truly mean most to us.

If we have no control over how long we spend on our phones or devices we may find our homes breaking up systematically. The way we use our phones & handheld devices can determine the direction of our marriages & condition of our homes. One by one, today's spouses are complaining of the same problem - uncontrolled use of phones & devices.

Are you prepared to limit the time you spend on phones, games & social apps to save your marriage?

Make your decision.
Mufti Ismail Menk
report post quote code quick quote reply
+1 -0Like x 1
back to top
Actions are judged by intentions, so each man will have what he intended.
ابو محمد
View Profile

#6 [Permalink] Posted on 17th December 2013 21:07
This is an awesome thread, very good but important reminder for all of ourselves to be careful of how we chose to entertain ourselves.

I enjoyed reading this thread, started off from dopamine and then came up to here. The information shared is point on masha-Allah.

Today I came across this peotry, thought may share it also:

In the fitnah of this mobile, everyone is involved
Those who were not involved before, they are now involved

Mubaligh, Mudarris, Mujahid, Muqarar
In desire/pursuit of an 'ajab thing, 'ajab (people) they are involved

Book-a-holic also came to stubbornness
When they are told, they say 'when are we involved?'

As soon (one) came off messenger, they delve into Whats-App
Just like this, in vanity, day and night (they) are involved

You blame on the Rubes O Hudud
What a shame, even the ahle adab are involved

May Allah Ta'ala keep us in the safe hands, and under His divine mercy. Ameen.

Once a farmer went down to his field, and planted a scarecrow. Thinking and saying to himself happily:
'Now since I have put up a scarecrow, the crows and other birds will not come nearby my crops and destroy the hard-work I put every day.'

Then he went home.

After a while, two crows came down and sat on a tree. One was called A and other was called B. A asked suspiciously:

B replied while smirking:
'No, do not worry. It is a scarecrow.'

B replied:
'Because he is not looking at his phone!'

You know what the irony of this is?

The Farmer assumes that the scarecrow is all he needs to succeed, whilst we all share and download Islamic Apps thinking it will help us succeed, but these apps are rarely used by us - yet we think we are going to do just great by dowloading the Apps :(
report post quote code quick quote reply
+0 -0Winner x 1
back to top
Actions are judged by intentions, so each man will have what he intended.
ابو محمد
View Profile

Presenting a New Heart Touching Nasheed for all Mobile users "Mobile Ka Fitnah" with beautiful lyrics, English and Urdu subtiles. which is written by "Hud Hud Ilahabadi" and recited by "Zaki Ahmed" with his beautiful voice.
report post quote code quick quote reply
+1 -0Winner x 1
back to top
Actions are judged by intentions, so each man will have what he intended.
ابو محمد
View Profile

In today's time to know the reality of a person, we just need to know what is hidden in either of the two:

In my recent visit to Rawdha Rasool

, I was waiting in line to say my salaat wa salaam, a few steps ahead of us a man was standing with his mobile phone raised high enough to indicate that he was talking to someone on a live video chat.

I was feeling bit irritated with the wheel chair bounded person behind me as his wheelchair kept touching my leg. We still not had reached in-front of the Rawdha Rasool

, as I looked up I saw the man had a full screen live chat on, where the whole face of a lady was visible. It was apparently clear, on first sight, that this lady did not had her head covered and was in a manner that no man should not see her in that state other than her mehram.

At-least the man should not had been so oblivious to know that other men were also standing nearby him and how they may be looking at the screen because of him. On top of this, in a sanctified and a place of adab, where we were about to present ourselves in-front of Prophet