Suitable for Vegetarians but not Muslims and Vice Versa

You have contributed 11.1% of this topic

SubhanAllah, look at how far these people go and think about how much the Muslims moan and groan about the strict rules of HMC.

This is a case where we dont really need to worry too much as Allah has told us that we can make use of the skin of the animal as coats etc. (read The Quran)

However PLEASE do bear in mind that PIG SKIN is very cheap and is Haram for us to wear, no matter how well it has been bleached.

You will find shoes for as little as £3 and the exact same style without pig skin will more than double that price.

Is this thier way of getting the Khinzeer into the Muslim household?

Textile: This means fabric, the list is endless. This is one of the symbols the vegans, vegetarians and eco-friendly consumers look for because it means all natural or man made materials are used for the construction.

Leather: This is the hide or skin an animal that has been put through a process called tanning. There are many types of leather and that is and educational page all in itself

Coated Leather: This is one of the processes of treating leather; basically the leather is coated with one of a variety of products for the desired look. 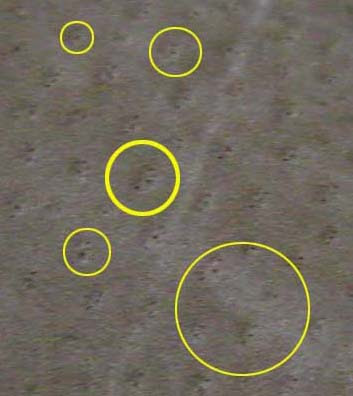 Outer Sole and outsole: This is the bottom of the shoe, which will show on the bottom part of the shoe but the main function is to protect your foot from the ground below.

Lining and Sock: This is the inside of the shoe, the part that provides you with the comfort and support that you desire.

Upper: This is the part of the shoe that you are initially attracted to, the part that you can see.

The Pig skin can be seen in the inner sole as well as outer parts on Coats.

HoHo~~this is what i found last week when i was hunting for new sport shoes at Makhota Parade malacca. And accidentally found pig skin lining shoes~!! i tried to smell if any BBQ pork smell on they shoes, but it is so carefully wrapped. I got warned by the workers there, as no photography is allowed there.

#18 [Permalink] Posted on 25th July 2012 10:25
reply
Brothers can u help me
I bought a fossil watch idont know what kind of leather does fossil use for watches?
Do u have an idea
report post quote code quick quote reply
+1 -0Like x 1
back to top

#19 [Permalink] Posted on 25th July 2012 11:17
reply
Anonymous wrote:
Brothers can u help me
I bought a fossil watch idont know what kind of leather does fossil use for watches?
Do u have an idea

Pig Leather is too fine to be used by itself so its used as a lining and usually not on its own. You need to check with Fossil is they are using the lining as its soft and comfortable around the wrist.


Not true but the facts are even grimmer. There are no agreed upon definition of "Suitable for Vegetarians" in UK or Europe so standards can't be enforced and no legal action can be taken.

"Suitable for Vegans" is controlled by the Vegan society, the label is proprietary so violations can be legally punished.

#22 [Permalink] Posted on 8th June 2014 22:31
reply
Not sure if this is a new trend, but I noticed our local Morrison store had something interesting.

There were some items in which the E numbers are no longer visible. What they have so stylishly done is replaced them with the actual wording.

Now to any normal person, it doesn't say "Gelatine or Animal Fat" so they assume that its halal. Some people still look for the "Suitable for vegetarian's" symbol and it can't be seen and sometimes that's because they do use certain things like egg etc, so again people are assuming that the product is Halal.

I was about to have some cake and when I felt how soft the cake was, even though it was opened a day before, I thought to myself that this cake feels to good to be halal :) so I checked the ingredients and saw nothing obvious nor any E numbers. Then I googled the ones I'd never seem before and to my surprise, they were actually the E numbers.

I then used the MuftiSays Android app and checked these numbers, only.to find that everything on the cake was doubtful.

Who knows what it really is.

As Muslims living in the West, many of us look at food ingredients and consider them to be Halal or Haram because it is suitable for a particular diet.

Here I just wanted to point out the differences in the 3 suitabilities.

What is a Vegan Diet

A vegan diet is one that consists of only plant-derived foods. Vegans don’t use or consume any animals or animal products including flesh (land or sea animals), milk, eggs, or honey.

This means that if a product says its not suitable for a Vegan diet, it doesn't mean that it's Haram altogether.
What is a Vegetarian Diet

The Vegetarian Society defines a vegetarian as: "Someone who lives on a diet of grains, pulses, nuts, seeds, vegetables and fruits with, or without, the use of dairy products and eggs. A vegetarian does not eat any meat, poultry, game, fish, shellfish or by-products of slaughter."

Pescatarian
Occasionally used to describe those who abstain from eating all meat and animal flesh with the exception of fish. Although the word is not commonly used and a pescatarian is not technically a vegetarian, more and more people are adopting this kind of diet, usually for health reasons or as a stepping stone to a fully vegetarian diet. Pescetarians often believe that moderate consumption of fish or fish oils, which are high in Omega-3 fatty acids, is necessary for optimum health, although vegetarian alternatives, such as flax seed oil, are available.

A Muslim can not be a Vegan, Vegetarian or Pescetarian, because this means we would be making what is Halal as Haram!
report post quote code quick quote reply
+2 -0Like x 2
back to top
Actions are judged by intentions, so each man will have what he intended.
ابو محمد
View Profile Block User

Shellac as mentioned on the previous page says that it requires more investigation because of the way it can be sourced from the insect.


I've always known it as Haram due to my findings. For Example www.muftisays.com/qa/question/1400/question-is-shellac-ha...

Today I saw a cake that was suitable for vegetarians and it contained shellac and remembered this thread and it's percentage. :( I decided to double check :)

Foodguide has now removed their stance on Shellac and left it to the individual...there is a difference of opinion between MuftiSays, SANHA and Mufti Taqi Usmani

Last Updated: 24/12/2012
In the Name of Allah, the Inspirer of Truth.
Assalamu Alaikum Warahmatullahi Wabarakatuh

On the basis of a recent Fatwaa issued by Darul Uloom Karachi and endorsed by the internationally renowned scholar, Mufti M. Taqi Usmani Saheb (DB), shellac is Halaal and hence Foodguide is retracting its previous view.

However, I understand that there is still some disagreement from other scholars and thus it is upto the individual to decide

Please subscribe to our Foodguide Newsletter from the Web-Site.

Jazakumullah Khairan for your email correspondence and for the opportunity to be of service to you.

Kindly excuse the belated response. Due to a technical problem we were unable to access the internet, emails etc.

Indeed, further research had become available as well as Fatâwa from other parts of the world (including the fatwa of Hazrat Mufti Taq Usmani Sahib) which indicated that shellac should be deemed Halaal. This research was forwarded to members of the SANHA Fatwa Committee and the majority have revoked their previous Fatwâ of impermissibility and concurred with the Fatwa of permissibility.

Consumer Department
Email: helpline@sanha.org.za
Website: www.sanha.co.za
report post quote code quick quote reply
No post ratings
back to top
Actions are judged by intentions, so each man will have what he intended.
ابو محمد

#26 [Permalink] Posted on 14th September 2017 04:34
reply
Aslkm, E635- is it halaal. Here in India Nestle Maggi noodles uses it as flavor enhancer...According to FAQ posted in its site it says:
We assure you that the Flavour Enhancer (635) used in MAGGI Noodles are made from a vegetarian source i.e. from beetroot and yeast extract. All variants of MAGGI 2-Minute Noodles (except the chicken variant) are 100% vegetarian.


I m using Maggi since many day... Please help me regarding this.
report post quote code quick quote reply
No post ratings
back to top
View Profile Block User

WasSalaam, E635 can be derived from animal and plant extracts. If they say it is of plant extract, then it should be okay to eat. However, since they are making it clear that this is not the case with the chicken flavour, then avoid the chicken flavour.
report post quote code quick quote reply
+1 -0Like x 1
back to top
Actions are judged by intentions, so each man will have what he intended.
ابو محمد