“There is not a pomegranate which does not have a pip from one of the pomegranates of Jannah in it.” (Abu Nu’aym)

If so, how can we have a morsel of food from Jannah even if it is as small as a pip. I thought Jannah food was really good and only reserved for the people of Jannah.

This is actually more authentically recorded as the statement of Sayyiduna ‘Abdullah ibn ‘Abbas (radiyallahu’anhuma) in Al-Mu’jamul Kabir of Tabarani (rahimahullah), and its best that we attribute it to him.

‘Allamah Haythami (rahimahullah) comments: ‘It narrators are those of the sahih’

There are other items from Jannah too which Allah has blessed mankind with. One example is the black stone on the Ka’bah.

‘The ‘Ajwah date is from Jannah’

This is Allah’s favour upon us. Instead of questioning it, we should be appreciating it.

However, from a Salafi point of view, this is fabricated

While I was eating pomegranate, someone told me that there is a hadith that says in one of the thuds in the pomegranate, one little thud is from paradise so one should make intention of something good incase he eats that thud. I wondered if this hadith is authentic or if there arent any hadiths about this at all so I can in shaa Allah tell that person.

Interactions of the Greatest Leader
ad

Answer
Praise be to Allah.

The pomegranate is one of the fruits of Paradise. Allah, may He be exalted, says (interpretation of the meaning):

“in them (both) will be fruits, and date- palms and pomegranates”

Ibn Katheer (may Allah have mercy on him) said:

The date-palm and pomegranate are singled out for mention because of their superiority over other fruits. End quote.

It was narrated by Ibn ‘Adiyy in al-Kaamil (7/543), and via him by Ibn ‘Asaakir in Tareekh Dimashq (56/186), via Muhammad ibn al-Waleed: Abu ‘Aasim told us, from Ibn Jurayj, from Ibn ‘Ajlaan, from his father, from Ibn ‘Abbaas, who said: I heard the Messenger of Allah (blessings and peace of Allah be upon him) say: “There is not one of your pomegranates but it is pollinated with a grain from the pomegranates of Paradise.”

Adh-Dhahabi also narrated this hadith, in his biography of him in al-Mizaan (4/59), as one of his false reports.

Concerning this ‘Abd as-Salaam, Ibn Hibbaan said: He used to steal hadiths and narrate fabricated reports. Al-Azdi said: His hadith is not to be written down. Ad-Daaraqutni said: He is nothing.

Therefore this hadith is false and fabricated.

It should be known that the fruit of Paradise resembles the fruit of this world in name only; as for its reality, there is a great difference between the two, the extent of which is known only to Allah.

Then there's this Hadith on the Rawdah on the same site with many interpretations
report post quote code quick quote reply
back to top
Actions are judged by intentions, so each man will have what he intended.
ابو محمد
View Profile Block User 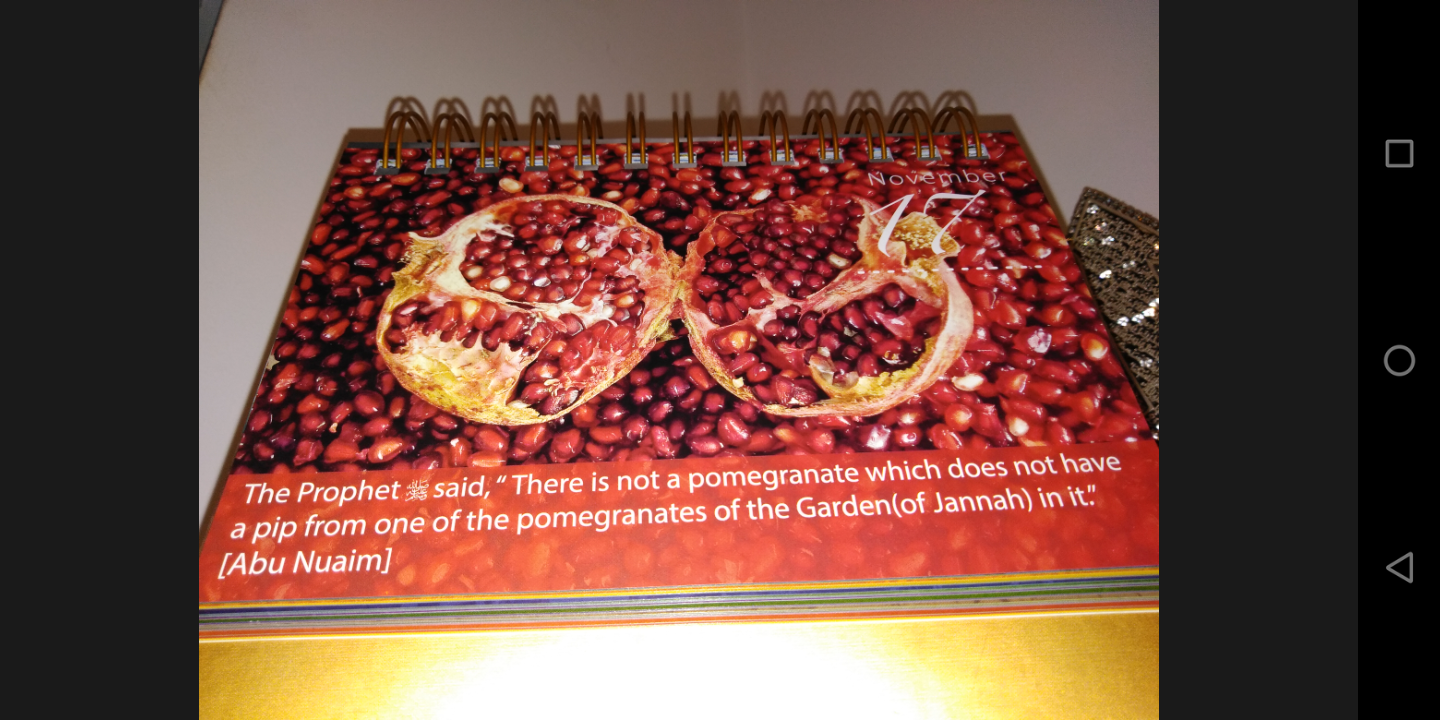 Downloads: 41
[1062.39 kB]
report post quote code quick quote reply
back to top
Actions are judged by intentions, so each man will have what he intended.
ابو محمد
View Profile Block User

A BENEFIT OF EATING A POMEGRANATE WITH THE RIND
Question

Is the following Hadith authentic?

“Pomegranate and its rind strengthen digestion(stomach).”

“Eat pomegranate with the skin, for it strengthens the stomach”

1) The narration in question is reported as the statements of Sayyiduna ‘Ali (radiyallahu ‘anhu) and should be quoted as such.

2) Imam Ibn ‘Adiy (rahimahullah) has recorded a lengthier version of this narration, transmitted via a fabricator. This lengthy version should not be quoted.

FABRICATED HADITH ON THE POMEGRANATE
Question

‘it cleanses you of Satan and evil aspirations for forty days.’

‘Allamah Dhahabi (rahimahullah) has declared this Hadith a fabrication.

And Allah Ta’ala Knows best,
Answered by: Moulana Muhammad Abasoomar
Checked by: Moulana Haroon Abasoomar
report post quote code quick quote reply
back to top
Actions are judged by intentions, so each man will have what he intended.
ابو محمد