What is the explanation of the Hadith where it is mentioned that some Sahabah said we go to certain areas and the people present us with food we do not know about the food (ie halal or not) and Rasulullah (sallallahu’alayhi wasallam) told them read Bismillah and eat from it.

Does it mean that if we in doubt about food being Halal just reading Bismillah is sufficient?

The Hadith you are referring to is recorded in Sahih Bukhari, Hadith: 5507.

In this Hadith, the Sahabah (radiyallahu’anhum) were actually enquiring about a specific situation, in which they were presented with freshly slaughtered meat by new Muslim Bedouins. The Sahabah were not sure if the new muslims had recited bismillah when slaughtering. This was the reason for their doubt and the subsequent question.

Since the ruling in Shari’ah is that if a muslim mistakenly omits the recital of bismillah before slaughtering, the meat will still be halal (lawful), Rasulullah (sallallahu’alayhi wasallam) did not pay any attention to this doubt of the Sahabah (radiyallahu’anhum) and advised them to recite bismillah and eat, like is generally done before any meal.

This does not mean that by merely reciting bismillah on meat that is known to be haram, or is highly likely to be such, it will render it halal!!

This is a grave contemporary misconception.

This is just one example of many ‘misinterpretations of the Hadith of Rasulullah (sallallahu’alayhi wasallam) in our era.

If today, one were in such a position like that of the Sahabah in this Hadith; wherein one is offered meat that was slaughtered by a new Muslim, then this Hadith indeed does apply to him.

This Hadith definitely does not refer to a case wherein one purchases meat from a non muslim outlet (which is most likely haram) and by merely reciting Bismillah before eating that purchased meat, it becomes halal.

In fact, according to some Hadith commentators, this narration in question is abrogated, and only applied in the early days of Islam.

– This will be the answer to those who insist on taking this Hadith to mean that: the mere recital of Bismillah on haram meat renders it halal!

As a rule, one should be extremely particular about what he or she consumes. Even a single morsel of haram has lasting ill-effects.

Unspecified
7,126
Sister
821
#2 [Permalink] Posted on 21st January 2018 23:54
reply
I’m not that knowledgeable about the Jewish community but would be interested in any information that could shed light on the following. There are certain Muslims from particular backgrounds in the community that believe to recite Bismillah is sufficient. Therefore kosher is also halal as Jewish people also believe in Allah and recite Bismillah when slaughtering meat.

My understanding would be that they do not believe in the last prophet Muhammed sallallahualyhiwassallam therefore it would not be accepted. Many Muslims have lived and still live peacefully amongst Arab Jews and eat their meat because the ruling of reciting Bismillah is covered and it’s not the shahada that is required.

Obviously if their is an option of halal being available which their is now. There is no need to eat kosher. Can anyone shed light on why muslims believe that Jewish recitation during slaughtering is taken in the same context as reciting Bismillah?
report post quote code quick quote reply
back to top
ربي زدني علما
(My Lord! Increase me in Knowledge)
View Profile Block User 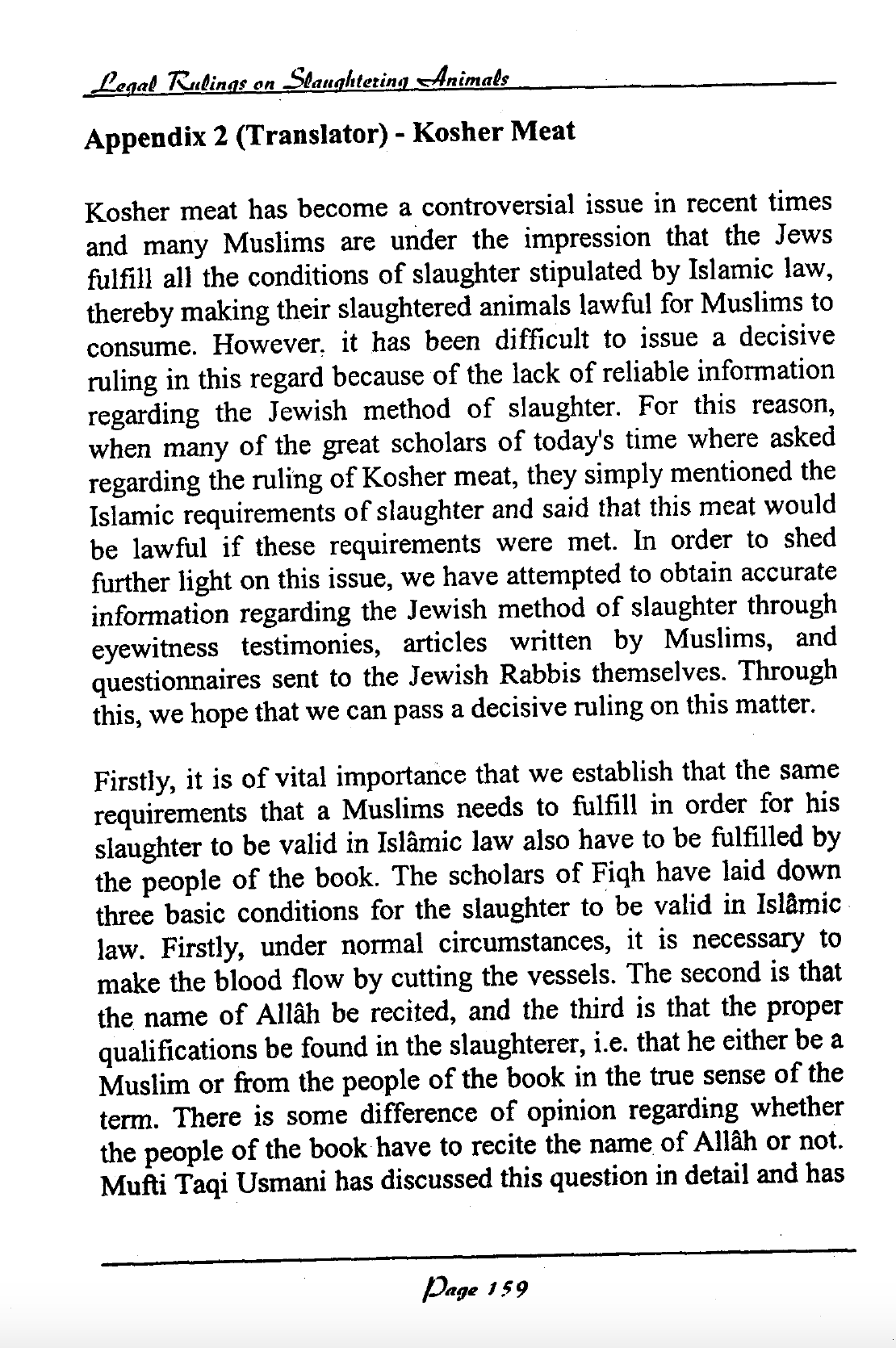 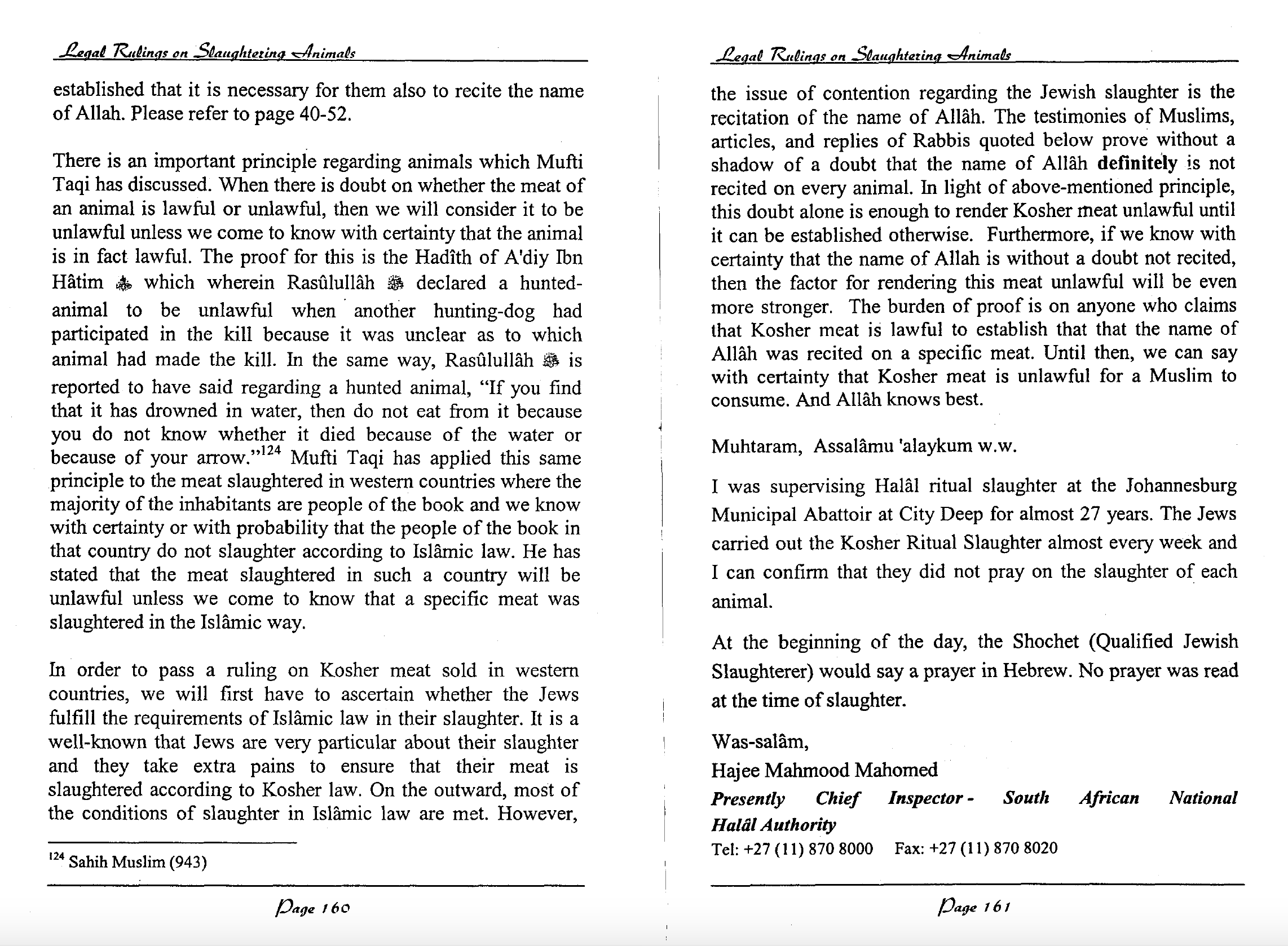 Kosher is NOT halal for Muslim's, neither is the slaughter of the Christians. Neither if these two Abrahamic religions follow what was taught to them and are no longer Halal. They no longer slaughter in the name of God either!

Did you know that the Porcine Flu Jab, Influenza is actually certified as Kosher! (Haram for Muslim's)
report post quote code quick quote reply
back to top
Actions are judged by intentions, so each man will have what he intended.
ابو محمد
View Profile Block User

Both of the answers given to you are good but incomplete.

The fact of the matter is that Rabbis who certify Kosher bless the knife or the location and not every single animal (in my two decades of experience in US and UK).

You can visit a Kosher abattoir and easily observe this procedure.

This may comply with Jewish procedures but does not comply with Islam because Dhabiha/Kosher needs to be done on each and every animal.

Orthodox Jews disagree with this practise and deem the meat to be impermissable and regularly warn against consuming it.

"Kosher" is hard to find even in Israel as I was told by leading Rabbis.

Thus "Kosher" isn't really "Kosher" in our times majority of the time.

When you are dealing with Arabs (worldwide) and American Muslims, the argument should be framed as follows.

They will likely lose the intellectual argument but keep on consuming Haram because it is matter of Taqwa and not a matter of argument, you can soundly defeat people on this issue in next to no time.

Very few of those who consume Haram are actually well read on the subject, they mostly do it for convenience

This is just my opinion and everyone is free to disagree

#8 [Permalink] Posted on 22nd January 2018 11:25
reply
@Muadh - Error in coding rectified - I think the left and right margins were causing the issue for the page to spread out and appear with an error.
report post quote code quick quote reply
back to top
Actions are judged by intentions, so each man will have what he intended.
ابو محمد