Mechanical Slaughter Back to Haunt us and we didn't even know!

As you know, we have discussed Mechanical Slaughter here and all have agreed and accepted as not acceptable and HARAM!

Since the new CEO of HFA Saqib Mohammed has taken over from Masood Khwaja, things have improved for them and for the Muslims.

Unfortunately, it doesn't stop there. Yesterday we looked into FAKE Certificates and stumbled across more certifiers and found a big mess!

Since Masood Khwaja left HFA and went into retirement in 2013, he made a come back with with yet another Halal certifier. The problem here is that his influence on the Halal Market has allowed him to attract big clients.

We found from the fake certificates that one of the major Halal food supplier to shools, colleges, airlines etc across the UK are being certified by Masood Khwaja who STILL ENDORSES MECHANICAL SLAUGHTER!

This company known as Halal Consultations has named the Masood Khwaja as the Anchor Person of this company who is PRO MECHANICAL SLAUGHTER.

This means that many of our children are consuming Haram in the name of Halal!

Quote:
Mechanical killing is a term that denotes that in poultry slaughterhouses which are fully mechanised, slaughtering is carried out by a fixed rotating blade. Throats are cuts by the blade without severing the spinal cord and for Zibah rule compliance licensed Muslim slaughterers are standing at the station doing the rendition of Shahada and Tasmiya with admissible parity to the speed of the line. And if a chicken is found on conveyer with out slit in the throat slaughterer would before the bird reaches the bleeding area slaughter it by hand with full rituals. Yes, it is preferable to have all the flock hand cut, as it would have been in non-mechanised plants, this method with the expediency of machines is viable and operable within the tenets of the Islamic dietary rules. It goes without saying that these days chicken are hatched by scientific methods influencing speedy growth and, then hung upside down shackling legs for slaughtering; without blinking an eye to say that technology is being used, science is being applied!! All the certifier of Halal has to ensure for mechanised killing is that that the bird is not decapitated (or dead), words of Shahada are recited, as required, and animal welfare rules are adhered to.

It is imperative to note here that up to a little while ago many a endorsing bodies did frown upon and disapproved with a scowl pre-stunning of birds and animals and the same organisations are now manifestly sanctioning it placidly and openly. The day is not very far whence sanity will prevail. True it is that slaughtering of animals is directed in the Qur’an and birds butchery is followed from Ahadiths (saying of the Prophet) and, the above procedures as concurred by Halal Consultations are in precise compliance of both 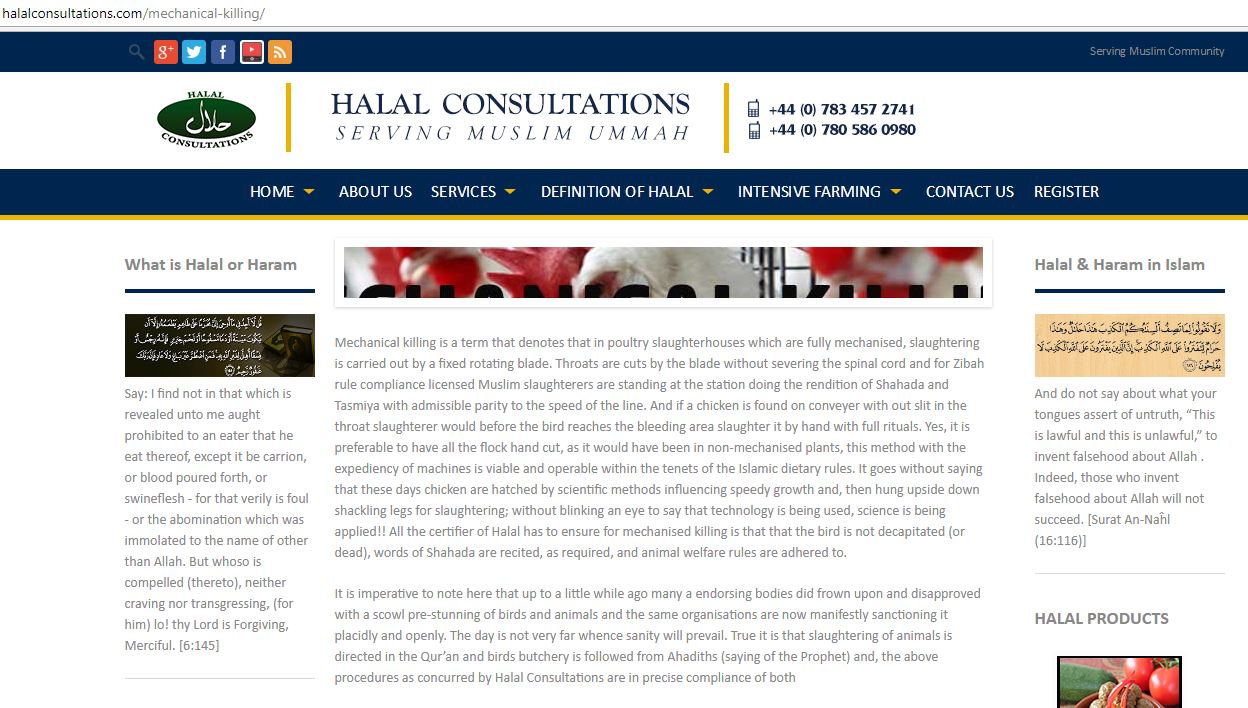 Downloads: 130
[166.24 kB]
report post quote code quick quote reply
No post ratings
back to top
Actions are judged by intentions, so each man will have what he intended.
ابو محمد
View Profile Block User

#3 [Permalink] Posted on 13th September 2017 12:42
reply
HMC News letter from 2007 needs to be looked at again and reprinted!
www.halalhmc.org/userfiles/file/NewsLetters/issue11.pdf 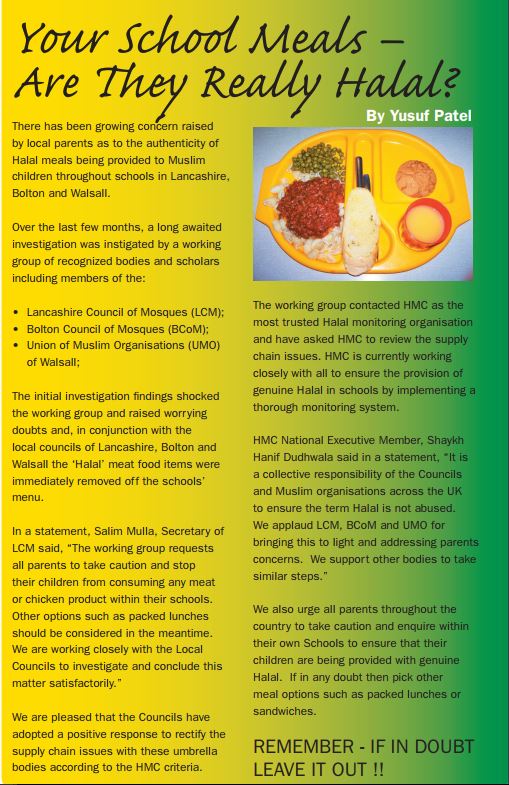 Downloads: 122
[115.38 kB]
report post quote code quick quote reply
No post ratings
back to top
Actions are judged by intentions, so each man will have what he intended.
ابو محمد
View Profile Block User

#4 [Permalink] Posted on 13th September 2017 17:24
reply
According to the Department for Environment, Food & Rural Affairs:

How to legally carry out religious slaughter, including how to restrain and bleed the animal.

It clearly states using a "hand-held" knife for all animals - I can't seem to find any mention of Mechanical slaughtering!

For any animal (including birds), you must use:

a hand-held knife that’s sharp and large enough for the animal you’re slaughtering
rapid, uninterrupted movements of the knife


So according to UK regulations, I guess these certified traders find the loophole of getting mechanically slaughtered produce from abroad!

They are playing with our Deen!
report post quote code quick quote reply
No post ratings
back to top
Actions are judged by intentions, so each man will have what he intended.
ابو محمد
View Profile Block User

An old friend contacted me recently who is not a Hanafi and doesn't understand Urdu and wanted to discuss this matter. I had to re-read a lot to jog my memory on the subject.

The discussion between the 4 Madhabs is this:

After reading hundreds of pages of information, we need to really avoid mechanical slaughter because there are too many unknowns here...

Mechanical slaughter is of three types:

1: Chickens are transported to the place of slaughter through a conveyer belt and are manually slaughtered. If there is certainty that the chicken is alive and the Muslim slaughterer recites the name of Allah upon slaughtering, then the chicken is Halal. In this case, only the transportation is mechanical but the slaughtering is manual. This procedure is unanimously permissible and recommended.

3: The chickens are transported by means of the conveyer belt to many slaughter blades and every blade is controlled separately by a Muslim who recites the name of Allah upon effecting the mechanical slaughter. This procedure conforms to the principles of Sharée Zabh set out by the Fuqahaa.

According to our knowledge, such a procedure does not yet exist. and Allah Ta'ala Knows Best
report post quote code quick quote reply
+1 -0Informative x 1
back to top
Actions are judged by intentions, so each man will have what he intended.
ابو محمد

Post New Topic Reply
You are here: Forum Index » Sharing & Voicing  » Sharing Portal  » The Food SectionMechanical Slaughter Back to Haunt us and we didn't even know!
###
Award Rep
Award reps to ... for this post