Why there is a pillar on Jabal al Rahmah?

What is the significance? 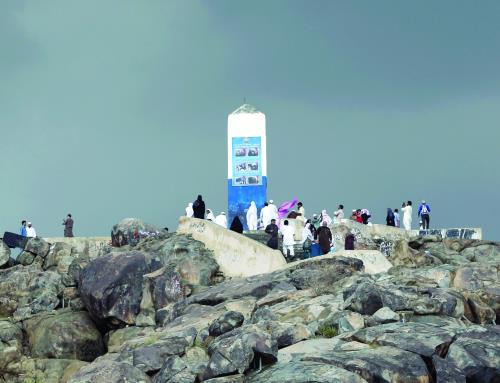 On the web, I found 5 different reasons why there is a pillar on Jabal Al Rahmah (Mount of Mercy or Mount Arafat), in Arafat:

1- to denote the place where the Prophet

stood for his last Sermon

2- to denote the place where Adam and Hawa(Eve) meet

4- the pillar is a satanic obelisk installed by the Saudi/wahabis
5- to denote the point where Adam (as)’s repentance was accepted.
The pillar was erected to remind everyone of this great event a
nd remind us that Allah is the most merciful

What is the true reason?

If you have the right information by links, fatwas, texts by scholars/muftis, etc...


Why there is a pillar on Jabal al Rahmah?

If you have the right information by links, fatwas, texts by scholars/muftis, etc...

Praise be to Allaah.

Shaykh Muhammad ibn ‘Uthaymeen (may Allaah have mercy on him) answered this question by saying:

islamqa.info/en/34154
report post quote code quick quote reply
+3 -0Informative x 3
back to top
Actions are judged by intentions, so each man will have what he intended.
ابو محمد
View Profile Block User

- Since when the pillar appear on the mount, era or year
- who decide to put it there
- the height,
- the color,
- etc,...
report post quote code quick quote reply
back to top
Roukaya19
View Profile Block User

The Truth Behind the Day of Arafah & its Name
Posted on November 4, 2011 by almaghrib
The Second Day of Hajj: Yawmu-Arafah

The Messenger of Allah (salla Allahu alayhi wa sallam) said: “ الحج عرفة “ or “Hajj is Arafah“. The Arabic text implies a very important concept of the meaning of Hajj. This short statement means that the whole hajj and its validity is confined in the actual day of Arafahi.e. Hajj becomes valid only when the day of Arafah is observed and witnessed by those who undertake the journey, the pilgrims. Regardless how long the hujjaj stay in Makkah, if they missed that single day, they have then missed the whole Hajj.

لَيْسَ عَلَيْكُمْ جُنَاحٌ أَنْ تَبْتَغُوا فَضْلًا مِنْ رَبِّكُمْ ۚ فَإِذَا أَفَضْتُمْ مِنْ عَرَفَاتٍ فَاذْكُرُوا اللَّهَ عِنْدَ الْمَشْعَرِ الْحَرَامِ ۖ وَاذْكُرُوهُ كَمَا هَدَاكُمْ وَإِنْ كُنْتُمْ مِنْ قَبْلِهِ لَمِنَ الضَّالِّينَ
“It is no crime in you if ye seek of the bounty of your Lord (during pilgrimage). Then when ye pour down from (Mount) Arafaat, celebrate the praises of Allah at the Sacred Monument, and celebrate His praises as He has directed you, even though, before this, ye went astray”

There are different interpretations on why that day was called Arafah or Arafaat, none of these opinions was authenticated by a solid textual evidence that can be traced to the Prophet (salla Allahu alayhi wa sallam). Nevertheless, the scholars of the past recorded them in their books as akhbar or stories of the past and therefore I quote for you few of these opinions here:

1. Arafah was the place were Adam and Eve met once again when they were sent down to reside on earth. They came down on two different spots but eventually were able to meet and recognize each other on this plain. Arafah here means “to get acquainted”, so based on this opinion Adam and Eve got acquainted to each other on that very same land we call today Arafah.

2. When angel Jibreel came down to Prophet Ibrahim (alayhis salam), he taught him the rituals of Hajj and took him around the Holy Sites. For every ritual explained Jibreel would say to Ibrahim “A’raft?” or “Did you learn (this one)?” and Ibrahim would reply with “Araft” or “I did”. Thats why it was called Arafah i.e. he got to know or learn.

3. It is a place where people get to know “ عرف or arafa” each other. Since the hujjaj or pilgrims spend most of that day on the same place and perhaps spot, many will get to know new people and learn more about them. So it is a place of تعارف or getting to know one another, and because of the great number of people who get to know each other the word عرفات or Arafaat came about.

4. The word عَرْف or A’rf means fragrance, and because the plains of Arafah are sites on which Allah’s mercy (rahmah) and forgiveness descend, the people would describe the day, the place and its dwellers of being perfumed with this spiritual and mystical fragrance “Arafah”. Moreover because of the rahmah or mercy descending upon the gathering, the small mountain on the plain on which many hujjaj desire to stand was called the mountain of Rahmah “Mercy”.

Despite the difference of opinion on why the day was called so, no scholar would argue the importance and significance of Arafah for the hajj and hujjaj.

More
report post quote code quick quote reply
back to top
Actions are judged by intentions, so each man will have what he intended.
ابو محمد
View Profile Block User

Brother, JazakaAllah khair for your effort and contribution

I found a 5th reason circulating on the web .. so I updated the first post
report post quote code quick quote reply
back to top
Roukaya19
View Profile Block User

Pilgrimage to Al-Madinah and Meccah,
by Richard Burton

"Arafat, anciently called Jabal Ilal ([Arabic]), “the Mount of Wrestling in Prayer,” and now Jabal al-Rahmah, the “Mount of Mercy,” is a mass of coarse granite split into large blocks, with a thin coat of withered thorns. About one mile in circumference, it rises abruptly to the height of a hundred and eighty or two hundred feet, from the low gravelly plain — a dwarf wall at the Southern base forming the line of demarcation. It is separated by Batn Arnah ([Arabic]), a sandy vale,22 from the spurs of the Taif hills. Nothing can be more picturesque than the view it affords of the azure peaks behind, and the vast encampment scattered over the barren yellow plain below.23 On the North lay the regularly pitched camp of the guards that defend the unarmed pilgrims. To the Eastward was the Sharif’s encampment, with the bright Mahmils and the gilt knobs of the grandees’ pavilions; whilst on the Southern and Western sides the tents of the vulgar crowded the ground, disposed in Dowar, or circles. After many calculations, I estimated the number to be not fewer than 50,000 of all ages and sexes; a sad falling off, it is true, but still considerable."

"The Holy Hill owes its name24 and honours to a well-known legend. When our first parents forfeited Heaven by eating wheat, which deprived them of their primeval purity, they were cast down upon earth. The serpent descended at Ispahan, the peacock at Kabul, Satan at Bilbays (others say Semnan and Seistan), Eve upon Arafat, and Adam at Ceylon. The latter, determining to seek his wife, began a journey, to which earth owes its present mottled appearance. Wherever our first father placed his foot — which was large — a town afterwards arose; between the strides will always be “country.” Wandering for many years, he came to the Mountain of Mercy, where our common mother was continually calling upon his name, and their recognition gave the place the name of Arafat. Upon its summit, Adam, instructed by the archangel Gabriel, erected a Mada’a, or place of prayer: and between this spot and the Nimrah Mosque the couple abode till death. Others declare that after recognition, the first pair returned to India, whence for 44 years in succession they visited the Sacred City at pilgrimage-time."

with the white pillar 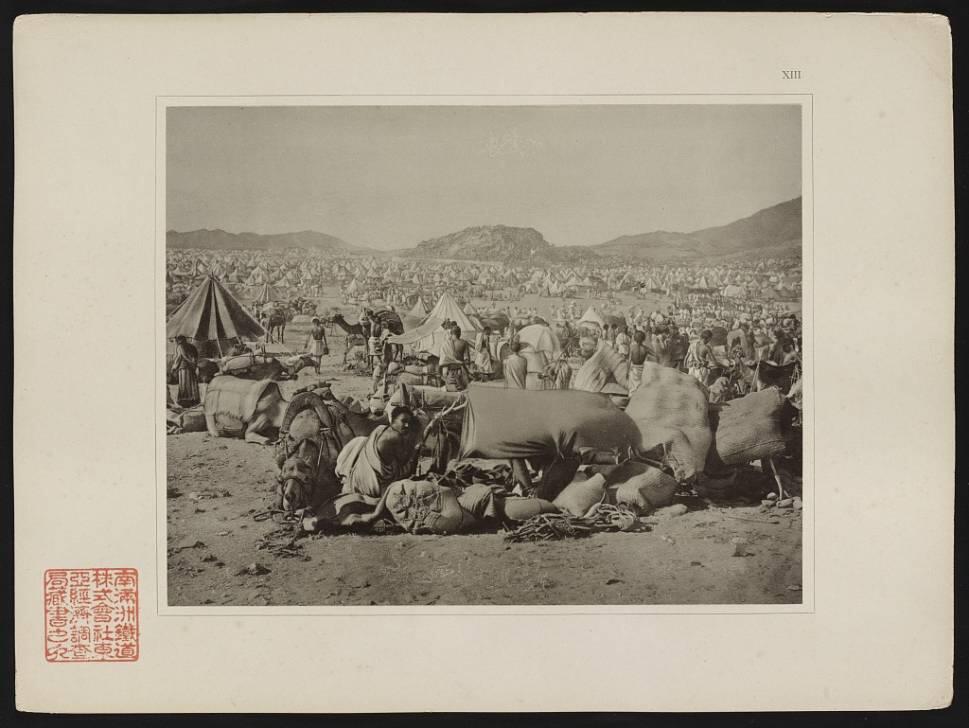 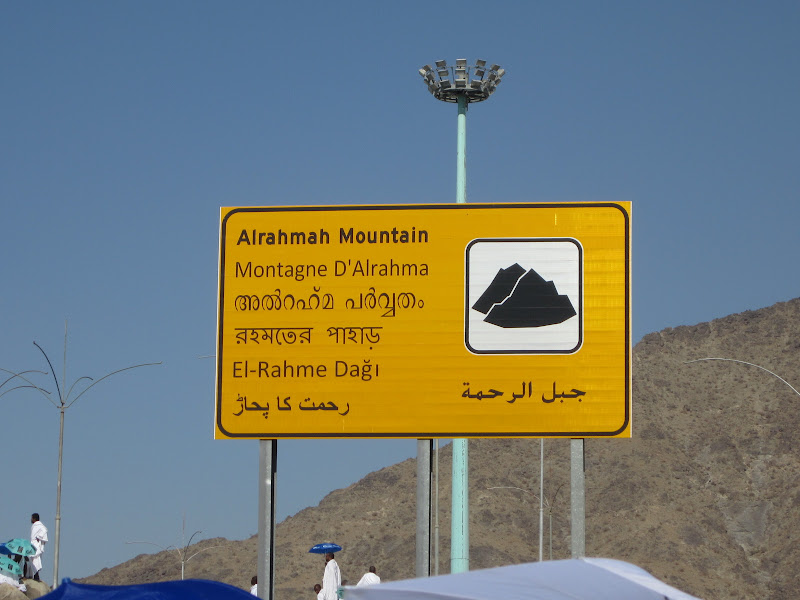 It might just be from the time of the ottoman empire.

EDIT: More on Burton and their diary.
www.gutenberg.org/files/41960/41960-h/41960-h.htm
report post quote code quick quote reply
back to top
Actions are judged by intentions, so each man will have what he intended.
ابو محمد
View Profile Block User

#10 [Permalink] Posted on 12th April 2015 21:07
reply
The Shia have also asked a similar question. Found it after reading and scanning through tons of web pages.

But again, no definitive answer from there too.
report post quote code quick quote reply
back to top
Actions are judged by intentions, so each man will have what he intended.
ابو محمد
View Profile Block User

I thought first, I will put the question about the pillar on Muftisays and I will have a quick answer!
But now, it's looks like this question is a mystery for all ... or nobody except you is interested to give answer.
The same happen in the other forum(SSC).

Saudi religious police have put 2 signboards on the pillar. One says about pilgrims mistakes and the other one with text I don't know.
If you know someone going for Umrah and plan to visit Arafat, please ask him what is written on.

Hajjis in Arafat during Hajj 1320 AH

This picture doesn't show the Mountain, maybe the photo was taken from the top. 1320 AH is approximately 1902 AD.

However, this picture seems to show something that does look like a pillar. It has some kind of marking too, this means someone hase made notes about it back then, possibly to say what it is.

View of Jabal-e-Arafat during Hajj
report post quote code quick quote reply
back to top
Actions are judged by intentions, so each man will have what he intended.
ابو محمد
View Profile Block User Mount Arafat. This image shows pilgrims camping at the Plain of Arafat. In this image, the relatively slow shutter speed captures the ghost images of figures ascending the lower steps to the right of the image. However, many other individual figures are in sharp focus. Most of the pilgrims – male and female – are wearing the two-piece garb, consisting of two white seamless sheets, associated with being in the state of ihram
HA Mirza & Sons/British Library
report post quote code quick quote reply
back to top
Actions are judged by intentions, so each man will have what he intended.
ابو محمد
View Profile Block User 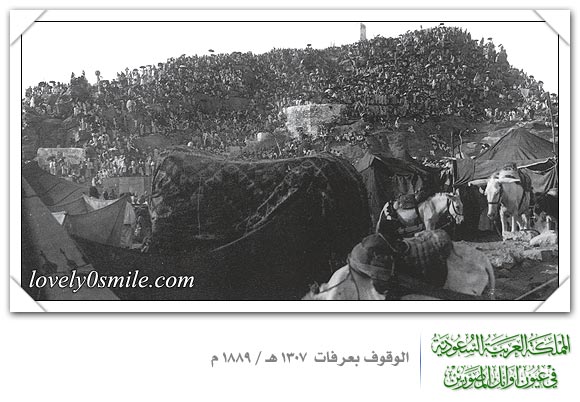 1889 - Arafat during Hajj (Found it on SSC) Pillar visible
report post quote code quick quote reply
back to top
Actions are judged by intentions, so each man will have what he intended.
ابو محمد
View Profile Block User

Post New Topic Reply
You are here: Forum Index » Literature  » Articles :: Stories :: More  » HajjWhy there is a pillar on Jabal al Rahmah?
###
Award Rep
Award reps to ... for this post