You have contributed 49.1% of this topic

JEDDAH: Saudi Arabia has given the go-ahead to implement new regulations related to public decency as the country opens up to foreign tourists.

The ministerial decision accompanies the launch of a visa regime that allows holidaymakers from 49 countries to visit Saudi Arabia. Until now, most visitors to the Kingdom have been either pilgrims or business people.

Men and women are required to dress modestly, refrain from public displays of affection, and avoid using profane language or gestures.

Women are required to cover shoulders and knees in public, but they are free to choose a modest choice of clothing.

The Kingdom is encouraging tourists and visitors to familiarize themselves with public decency laws in order to avoid fines.

Violations listed on the new visa website include littering, spitting, queue jumping, taking photographs and videos of people without permission, and playing music at prayer times.

“The regulations are meant to ensure that visitors and tourists in the Kingdom are aware of the law relating to public behavior so that they comply with it,” said a government media statement, adding that Saudi police had the sole responsibility for monitoring offenses and imposing fines.

The sale, purchase and consumption of alcohol are illegal in Saudi Arabia, as is bringing alcohol or drugs into the country.

The new code forbids hate, racism, discrimination and indecent behavior. Anyone found engaging in indecent behavior, which includes acts of a sexual nature, will receive a SR3,000 fine that can be doubled if the violation is committed a second time.

The charter forbids playing loud music in a residential area without a prior license. The violator will receive a SR500 penalty that could be doubled if repeated.

A person who plays loud music at prayer times will receive a SR1,000 fine. Repeating the violation exposes the offender to a SR2,000 penalty.

Saudi Arabia has traditionally given high priority to attention and respect for the elderly and those with special needs.

As such, the new code says anyone who occupies their seats and facilities will receive a SR200 fine for the first time. The fine can be doubled if the violation is repeated.

The new code imposes a SR100 fine on people who fail to remove the excrement of their pets. The fine can be doubled if the violation is repeated.

The same punishment can apply to other violations such as writing or drawing on public transportation vehicles or public walls; lighting fires in public places; harming or frightening anyone in a public place, whether verbally or physically; and directing harmful lights, such as laser beams, at someone. 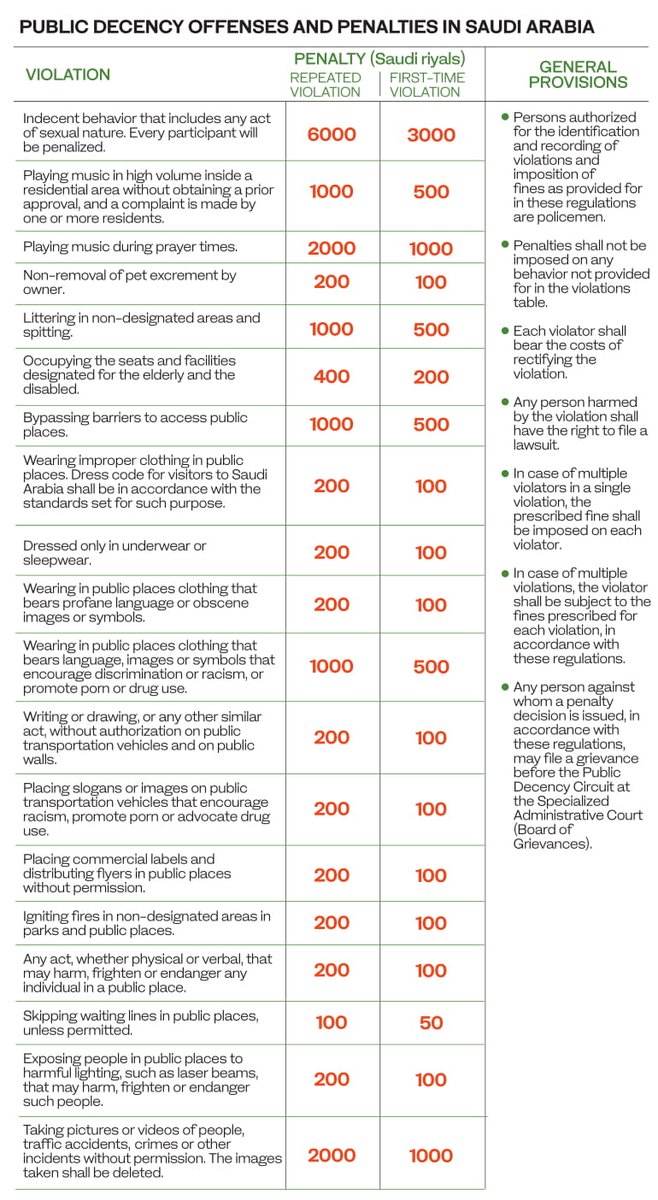 The new code includes a SR1,000 fine for those who take photos or videos of people without their permission.

The fine, which may be increased to SR2,000, applies to taking photos or videos of traffic accidents, crimes and other similar incidents.

Unless allowed, those who do not respect their turn in a line of people waiting to be served will be fined SR50. That amount can be doubled if the law is broken a second time.

The new code says no penalties can be imposed on any behavior not mentioned in the charter. It adds that violators will have to bear the costs of rectifying their violation.

Anyone harmed by a violation can claim their private rights and file a lawsuit against the offender.

In case of multiple offenders in a single violation, the prescribed fine shall be imposed separately on each violator.

Any person on whom a penalty is imposed has the right to file a complaint before the Public Decency Circuit at the Specialized Court (Board of Grievances).

Women sit among men in a cafe in Khobar, Saudi Arabia opened this year.
December 08, 2019

RIYADH/MAKKAH: The Ministry of Municipal and Rural Affairs has ended the requirement for restaurants to have separate sections for males and families.

Dr. Majid Al-Qasabi, the department’s minister-designate, also approved other updates to rules and regulations in different sectors on Sunday.

Dr. Khaled Al-Jammaz, undersecretary-designate for technical affairs at the ministry, explained that the move was part of a number of amendments that included 103 regulations, requirements, manuals, models, standards and applications for activities of all kinds.

“They will be positive and will ease many conditions and restrictions, but they will not affect the core of the work in terms of public health and food, and this decision will increase the flow of investment and the number and variety of restaurants,” he said.

Nasser Al-Shalhoub, one of the owners of the soon-to-be opened Chaoua coffee shop, said that ending the requirement to have separate sections for males and families was an excellent decision — “especially since we are facing a problem with increasing costs because we are obligated to make two counters for the two sections, and now with this amendment the ministry has helped us to start working and reduce costs.”

“This will benefit us because we will take advantage of the space, and the area will look better,” he said.

Abdulrahman Al-Harbi, an architect, said: “A good designer can provide clever solutions to offer privacy for customers in different ways; it doesn’t have to be by blocking the place with big walls,” Al-Harbi said.

Ruba Al-Harbi, who manages a restaurant and owns the Snapchat lifestyle account, also agrees with the amendment. “It’s a waste of money to open two sections for males and families because this segregation will do nothing when both sides meet outside the restaurant’s doors.” She said that she had noticed the change a while ago, even before it was announced on the ministry’s website.

“I have entered several restaurants that had only one section and it was fine to sit and eat there.”

Al-Harbi said that were many issues when restaurants were divided. “Family sections are usually crowded. You often can’t find a place to sit while male sections are always empty because they don’t go to restaurants as much as females,” she said.

Dareen Rajeh, a compliance analyst, said that many people in Saudi Arabia needed to get used to the existence of both sexes in the same place without becoming confused or uncomfortable. “We need to open our horizons and focus on more important issues.”

There was NEVER any gender segregation in Saudi Arabia, what they had was:

This was a stupid bedouin custom which made no sense at the zoo, public places, restaurants etc


Haya is brutally slaughtered in haramain sharifain by hajees during their stay here. Even the most pious are compelled to slaughter haya.
I won't elobrate on this.

Pious women should stop visiting haramain after their fardh haj.

#5 [Permalink] Posted on 13th December 2019 15:28
A relative just came back after going for the first time and he was in absolute shock.

I can understand how some Ulama would deem this to be so, sad situation for the Ummah.

There are many many Ulama who say that it is preferred to use the money for beneficial purposes then to keep doing it Nafl Hajj & Umrahs in private.

It is winter time and our Syrian brothers and sisters are in need of Blankets and bare necessitates.
People are spending $2500 on a Umrah trip. Allah Allah!


I have seen this kind of “gender segregation” in some places in Pakistan as well.
In my opinion, it does have some logic behind it.

Men, if they are not with their families, are more likely to harass women or make advances.
So only-men groups are separated.

I’m not calling it Shariah compliant because the family section is technically free-mixing, but this policy does work from a purely social perspective.
report post quote code quick quote reply
back to top
muslimman

#13 [Permalink] Posted on 14th December 2019 15:19
I heard Saudi are also opening a beach for tourists in which there will be no restriction on clothing or food and drink served.
report post quote code quick quote reply
back to top
Khidr786
View Profile Block User


Alhamdulillah, my womenfolk never experienced or were on the receiving end of perverted behaviour.

Those women who allegedly get groped should remain with their mahrams at all times and perform Umrah or Tawaaf during quiet times. Even then it's a good idea for them to do so in the outer part of Mataf, they should be fine. This the Sunnah of our Mothers (RA) and other female Companions (RA). Common sense really.

I think it's unfair to assume that everyone who traditionally go yearly don't consider the plight of our brothers and sisters. I'm sure many of them donate whatever they can within their capacity and perform du'a for the Ummah at large in the best of all places. For many that is one of MANY incentives to keep going.

Ultimately in the Grand Divine Scheme of things, it's all about you as an individual. It's everyone for themselves on the Day of Judgement. One of the best ways to ensure and salvage your Akirah is to keep performing Umraj and Haj (subject to the obvious conditions as we're all aware of) as often as possible as per the recommendation of Rasulullah (SAW) himself based on authentic narrations. This was also authentically proven to be the case of the Companions (RA) after the passing of Rasulullah (SAW) even during the precarious times when there was political turmoil going on in the reign of Khulafaah Rashideen. This screams volume of the importance of Umrah and Haj.

Alhamdulillah, the majority of 'Ulema of all madhabs don't consider it Haram to travel for Umrah and Haj in this day and age. Those who say otherwise are entitled to their position, but it's not incumbent for the Ummah to adhere to their fatwa/fatawas.
report post quote code quick quote reply
back to top
Imam Ali