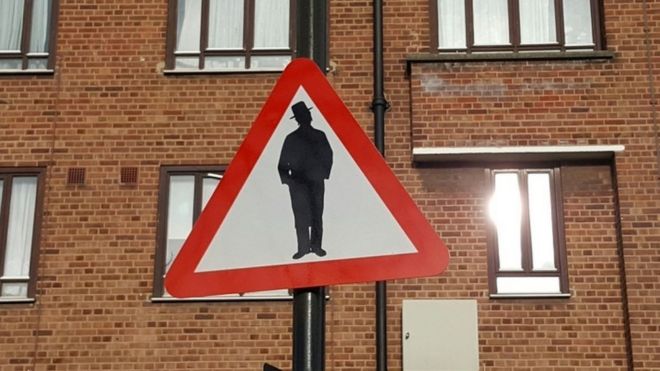 A road sign which appears to warn "beware of Jews" has appeared just yards from a synagogue in north London.

The sign depicts the silhouette of an orthodox Jewish man wearing a traditional fedora hat and was spotted on a lamppost in Stamford Hill.

A Jewish neighbourhood watch group saw the sign on Forburg Road and reported it to police on Tuesday.

It is understood the sign, found just 200m from a synagogue, was later removed by Hackney Council.

Barry Bard, from the group, said it was the first known sighting of such a sign, which had caused alarm in the local community due to its meticulous planning.

He said: "The people of Stamford Hill are very sadly used to instances of anti-Semitic hate crime, but most of those times it will be verbal abuse or even assault.

"The person who planned [this sign] has obviously gone to an effort to cause alarm and distress to local people."

Shadow home secretary and MP for Hackney North Diane Abbott said it was "disgusting" and "unacceptable", while Labour's MP for Tottenham David Lammy said it amounted to "despicable, nasty behaviour that has absolutely no place in our community".