You have contributed 0.4% of this topic

There are a few views on this and on the forum, we will go for the safer view.

You can also search for photos, images, pictures, animate, etc on the forum
report post quote code quick quote reply
back to top
Actions are judged by intentions, so each man will have what he intended.
ابو محمد
View Profile Block User

Shaykh Sudais www.arabnews.com/node/1635811/saudi-arabia
report post quote code quick quote reply
back to top
Actions are judged by intentions, so each man will have what he intended.
ابو محمد
View Profile Block User

Mataf, Masa and Al-Rawdah
closed temporarily;
prayer inside mosque only 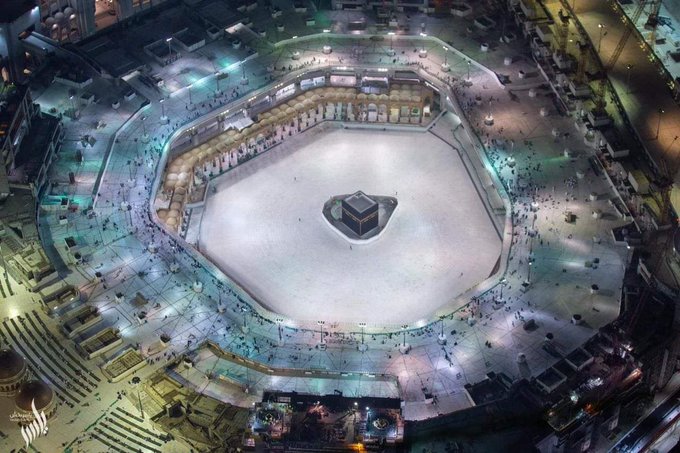 RIYADH — The Mataf, (area for circumambulation around the Holy Kaaba) and Masa (area for sa’i between Safa and Marwah) at the Grand Mosque in Makkah will remain closed during the period of suspension of Umrah, the Saudi Press Agency reported.

According to an official source at the Presidency for the Affairs of the Two Holy Mosques, prayer will be allowed only inside the Grand Mosque.

The old mosque, including Al-Rawda Al-Sharif within the Prophet’s Mosque in Madinah, will also be closed during the suspension period for Umrah performers and visitors to the mosque.

The Baqi Cemetery adjacent to the Prophet’s Mosque will also be closed for visitors. The spokesman said that the Two Holy Mosques will be closed one hour after Isha prayer and will reopen one hour before Fajr prayer.

The source stated that these are part of the precautionary health measures recommended by the concerned authorities, as well as part of maintaining the cleanliness and intensifying sterilization work at the Two Holy Mosques to prevent the spread of infection.

It was also revealed that the decision to temporarily suspend Umrah for citizens and residents will be applicable to all residents of Makkah and that anyone, wearing ihram dress, will not be permitted to enter the Grand Mosque and its courtyards.

It was also decided not to allow i'tikaaf (seclusion for worship in mosque) and squatting at the mosque or bringing food and drinks inside the mosque. All Zamzam water containers will be stopped serving pilgrims, the spokesman added. 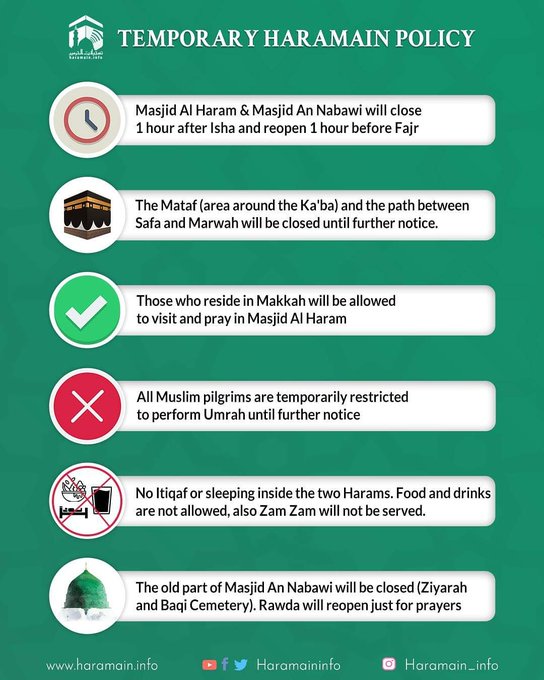 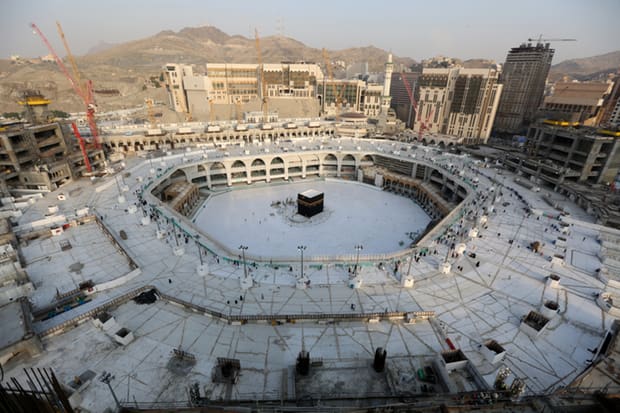 An aerial view taken on March 5, 2020 shows the white-tiled area surrounding
the Kaaba, inside Makkah's Grand Mosque, empty of worshippers.

MAKKAH: Saudi Arabia announced on Thursday that the Grand Mosque in Makkah and the Prophet’s Mosque in Madinah will close an hour after the Isha prayer and will open an hour before Fajr (dawn) prayers each day.

It is the latest precaution to prevent the spread of the coronavirus in Saudi Arabia.

The Kingdom suspended all Umrah pilgrimages on Wednesday over coronavirus fears and authorities have cleared out the Grand Mosque in preparation for its sterilization, following the recent suspension of Umrah visits.

A Saudi official said the deep-cleaning operation is a “temporary preventive measure” that is “unprecedented.” Upper floors remain open for prayers, he added. Videos posted online on Thursday showed a deserted mataf, the area where pilgrims circumambulate the Kaaba.

The areas surrounding the Kaaba where pilgrims walk around it seven times and between the hills of Safa and Marwah where they perform a ritual called Sa’ee will remain closed until the Umrah ban is lifted. Prayers will be performed inside the Grand Mosque.

Bringing food and drink into the mosques is now prohibited and access to Zamzam containers will temporarily be stopped.

The Sacred Chamber in the Prophet’s Mosque in Madinah which houses the graves of Prophet Muhammad and his two companions, Abu Bakr Siddiq and Omar ibn Al-Khattab, will also be closed off to worshippers.

The changes at the Two Holy Mosques came as the Kingdom accused Iran of increasing the global threat from the coronavirus by not properly documenting the arrival and departure of foreign visitors.

The Ministry of Health previously announced five Saudis tested positive for COVID-19 after returning from Iran, via Bahrain and Kuwait, without revealing they had been in Iran.

An official source in the Kingdom denounced the irresponsible action of granting Saudi citizens entry to Iran without stamping their passports at a time when there is an outbreak of the virus in the country.

It is proof of Iran’s direct responsibility for growing infection rates and the spread of the virus around the world, the source said. Such behavior poses a serious public-health threat to the global community, undermines international containment efforts, and puts communities at greater risk,

The official urged all Saudis who have visited Iran recently to call the Ministry of Health’s toll-free number (937) so that health precautions can be taken. Saudis currently in Iran were urged to report their visit immediately upon return. Citizens who voluntarily report their visits to Iran within 48 hours of this announcement will not be subject to the Travel Documents Law and related regulations, the official said. The priority is to ensure the health and safety of citizens who have visited Iran, and their families, by removing the threat of legal action so that they take advantage of safety measures, he added.

The official reiterated that Saudi citizens should not travel to Iran for any reason, and anyone who ignores this faces serious legal repercussions. He called on Iranian authorities to disclose the identities of Saudi nationals who have illegally visited Iran since Feb. 1, and added that they are fully responsible for all Saudis who fail to report their visits and become infected in Iran.

In another development, seven Palestinians working at a hotel in Bethlehem where Greek tourists were staying have tested positive for the coronavirus. The government has declared a two-week ban on tourists.

Italy has closed all schools for at least 10 days, and Iran is closing educational institutions until April. California has declared a state of emergency after its first coronavirus death, and a cruise ship with 3,500 people on board is being held off its coast.

#6249 [Permalink] Posted on 6th March 2020 16:02
Rajab wrote:
View original post
That's impossible to know at this point.
There's been no data, so far, about the disease dying off.

That's true but I have a feeling that even if they were to resume umrah visa, there will be too many restrictions inside both harams
report post quote code quick quote reply
back to top
Rajab
View Profile Block User

The announcement clearly states, "Until further notice" there is no timescale or guesstimate.

Currently no umrah at all since the area between safa and marwa are closed off. Tawaf continues inside the Haram and on the roof.

#6252 [Permalink] Posted on 6th March 2020 20:15
What's with all the stupid hype and people going on about signs of qiyamah. Get a grip. Tawaf and salah have COMPLETELY been stopped in the haram before. Most recently was probably during the 1979 seige.

As you no I'm not fan for ale salool but they done something right. I'd go a step further and close entire masjid and do a deep clean then open. Mataf is probably the cleanest and safest place in the masjid anyway due to it being in open space, except for the kabah that probably is a hotspot to pick up germs due to amount of people touching it.

and shaykhain رضي الله عنه no illness/virus would go anywhere near their vicinity.

We got more chance of dying from cancer and lightning strike than this corona so let's jus calm down. No harm shall reach us except for what Allah has ordained. If you read the advise from Dr's it's basically basic hygiene and cleanliness which as Muslims we should be doing regardless. I cnt even count number of times I wash my hands daily and that's not even including 3 to 5 times minimum wudu.

BTW why do live makkah feed not show mataf anymore?

It's better not to let its viewers feel hurt and not to let its haters feel happy. Thousands still there offering Salah and performing tawaf inside and on the roof, alhumdulillah.
report post quote code quick quote reply
back to top
Actions are judged by intentions, so each man will have what he intended.
ابو محمد
View Profile Block User

#6254 [Permalink] Posted on 6th March 2020 22:14
It looks like empty. Iv had some dreams recently where I am in the mataf all alone makin tawaf with 1 had touching kabah. InshAllah one day my dream can become a reality
report post quote code quick quote reply
back to top
mkdon101
View Profile Block User

#6255 [Permalink] Posted on 7th March 2020 08:22
Mataf is now partially open to non pilgrims. Should be able to see on their live YouTube channel too

Basically, you won't see anyone in Ihram.


You are here: Forum Index » Sharing & Voicing  » Sharing PortalMakkah News and Updates
###
Award Rep
Award reps to ... for this post