Harvard University Ranks “Quran” As The Best Book for Justice

Harvard University quotes the Quran, with its divine words, which is the final revelation as believed by us, the Muslims. Allah has selected it as His last and final book. Without any doubt, it came from the Creator of this Universe and guides us on the right path of living.

Rules and Justice are highly prioritized in Islam and the Holy Book which is full of essential laws for humans. Islam doesn’t have any space for injustice.

The whole globe also accepts this truth and reveres what is mentioned in the Qur’an. Though their actions appear contrary, the same is the case of Muslims.

At the entrance of the Library for Faculty, Harvard Law School, being of the prominent Law School, has displayed an ayah from Surah Nisa. It explains that it is among the greatest expression regarding justice in the past. Harvard Law School is known to be home to the biggest academic library around the world and is a part of Harvard University.

The Ayah number 135 from Surah/Chapter Nisa (woman) orders human being to stick firmly by justice. Following attached it the whole verse: 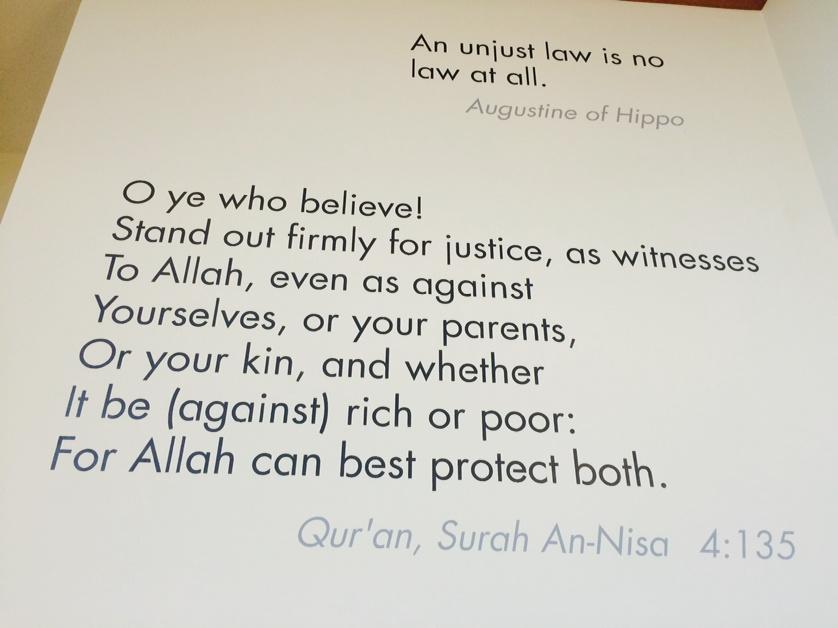 It appears to be among the three significant quotations displayed on the wall which is facing the main entrance of the faculty. The rest two belongs to St. Augustine and Magna Carta.

#2 [Permalink] Posted on 23rd January 2020 20:33
abu mohammed wrote:
View original post
I was going to rate this as optimistic, but apparently that's a bad rating?

I would say you're being overly optimistic abut this part:
Quote:
The whole globe also accepts this truth and reveres what is mentioned in the Qur'an. Though their actions appear contrary, the same is the case of Muslims.

I agree that they picked an excellent verse from the Quran to appear in it's halls where the practice of justice is learned. (supposedly)

I think that's a far cry from the whole world accepting the Quran (or even that verse) though, unfortunately.

Those aren't my words, it's from the article.
report post quote code quick quote reply
back to top
Actions are judged by intentions, so each man will have what he intended.
ابو محمد
View Profile Block User

Ok, sorry. I read the article quickly and didn't realize that was a quote from it.

I absolutely love that they put it there. Hopefully some of these academics will see the word Allah سبحانه وتعالى and gain an interest in Islam.