Forum Index » Sharing & Voicing  » Sharing PortalDrone Attack in Saudi Arabia?
Forum Menu - Click/Swipe to open
Show Forum Menu
Recent Posts
Two Lockdowns in sub-continent.
1 hour ago by Rajab
How soon do you think The Mahdi will arrive?
5 hours ago by Muadh_Khan
Tomb & Grave of Umar bin Abdul Aziz Destroyed
9 hours ago by ssaad
Coronavirus
12 hours ago by Moonlight
Makkah News and Updates
17 hours ago by ssaad
India China Standoff 2020
17 hours ago by joy
Any Khulafa of Hazrath Ahmed Pratapgarhi rah still alive?
21 hours ago by Ibn Ghafoor
Tarana, the Anthem, the Motivation Poetry
31/05/2020 by bint e aisha
Never make fun
31/05/2020 by ssaad
Karguzari (Report) on Islam in Damascus
31/05/2020 by a2z
Recent Top Rated Posts
+6 - Re: What to do with taweez? (Sihr).
by Abdur Rahman ibn Awf
+6 - Re: Re: Shawwal 1441 Moonsighting: Eid around the World
by Pakora
+5 - Just remembered...
by xs11ax
+5 - Re: Who are the Greatest living Deobandi Scholars?
by mSiddiqui
+5 - Re: Re: Re: Re: Apologies to all
by Abdur Rahman ibn Awf
+5 - Re: Re: Re: Apologies to all
by Muadh_Khan
+5 - Re: Karguzari (Report) on Islam in Damascus
by Muadh_Khan
+5 - Re: Is marriage predestined?
by xs11ax
+4 - Re: India Diary
by Maripat
+4 - Re: Is marriage predestined?
by bint e aisha
Top Members
Forum Menu
Search Forums Memberlist
▼
Statistical Pages
» Recent Replies » Most Appreciated » Popular Threads » Polls / Surveys » Top Rated Posts » Worst Rated Posts

#2 [Permalink] Posted on 15th September 2019 21:38
Could it not be an internal fire or accident type of thing?
report post quote code quick quote reply
No post ratings
back to top
The world does not forgive the weak.

Why would Saudi Government then not ascribe internal fire to these incidents? Because admitting that its a Terrorist attack makes their armed forces look stupid!

No way these were drone attacks or internal fire!

It is a ‘major’ incident.I would even call it a ‘game changer’.

Such events don't happen for dropping a ‘few’ bombs on Yemen. I agree with Muad khan, it is the start of ‘something big, really big’.

Saudis most probably fully understand, by now, what happened, why it happened and who did it for what purpose. If they could, they would pin it on yemen rebels, drop a few bombs and let it pass. Unfortunately they will find themselves ‘helpless’ and ‘trapped’ in the course of events...

#8 [Permalink] Posted on 16th September 2019 11:34
May be Saudi invite us forces on its soil
report post quote code quick quote reply
No post ratings
back to top
a2z
View Profile

Quote:
Allah's Messenger (ﷺ) told us a long narrative about Ad-Dajjal, and among the many things he mentioned, was his saying, "Ad-Dajjal will come and it will be forbidden for him to pass through the entrances of Medina. He will land in some of the salty barren areas (outside) Medina; on that day the best man or one of the best men will come up to him and say, 'I testify that you are the same Dajjal whose description was given to us by Allah's Messenger (ﷺ) .' Ad-Dajjal will say to the people, 'If I kill this man and bring him back to life again, will you doubt my claim?' They will say, 'No.' Then Ad-Dajjal will kill that man and bring him back to life. That man will say, 'Now I know your reality better than before.' Ad-Dajjal will say, 'I want to kill him but I cannot.'

Iran is just a pawn, real enemy is Saudi Arabia which they want to capture. Of course they won't be able to enter Mecca and Madina.
report post quote code quick quote reply
No post ratings
back to top
TechMan
View Profile


What do they need to capture? Their basis are already there. The prince is in their hands. What else they need to capture which is not already captured?
report post quote code quick quote reply
No post ratings
back to top
The world does not forgive the weak.

•Destabilisation in the whole region, destroying whatever little power we are left with (economic and military), so that whenever the time comes, it is a walkover for Israel to become ‘greater Israel’.

Why are they so interested in ‘greater Israel’ ? , many will be surprised to know that for a long time American foreign policy is extensively influenced by biblical eschatology and prophecies. They may even sincerely want to ‘hasten’ the arrival of promised 1000 years ‘Golden age’, if not all, at least a good number of them believe in biblical prophecies and take it seriously.

• Full control over the resources of the region

• putting Muslims in total submission believing us Muslims to be the potential allies of ‘Anti-Christ’. It is funny that we think exactly the same about them :)

Now, fortunately Jews are not much in numbers and they can’t physically maintain the occupation of such vast lands, so they will rule the areas through their ‘puppets’ for which it is necessary to divide the whole Arab land into multiple small countries, on the basis of ethnicity, sects etc.

For example, Iraq can easily be divided into three countries
(Kurdistan, A Sunni state and a Shia state), similarly Syria can be divided into multiple small states and so on....

For all that, it is necessary to encourage and promote infighting between Muslims with mutually assured destruction.


I wish the English speaking Arabs start reading Muftisays.
report post quote code quick quote reply
No post ratings
back to top
The world does not forgive the weak.

16SEP2019: Saudi Arabia knows its defences are not up to war with Iran 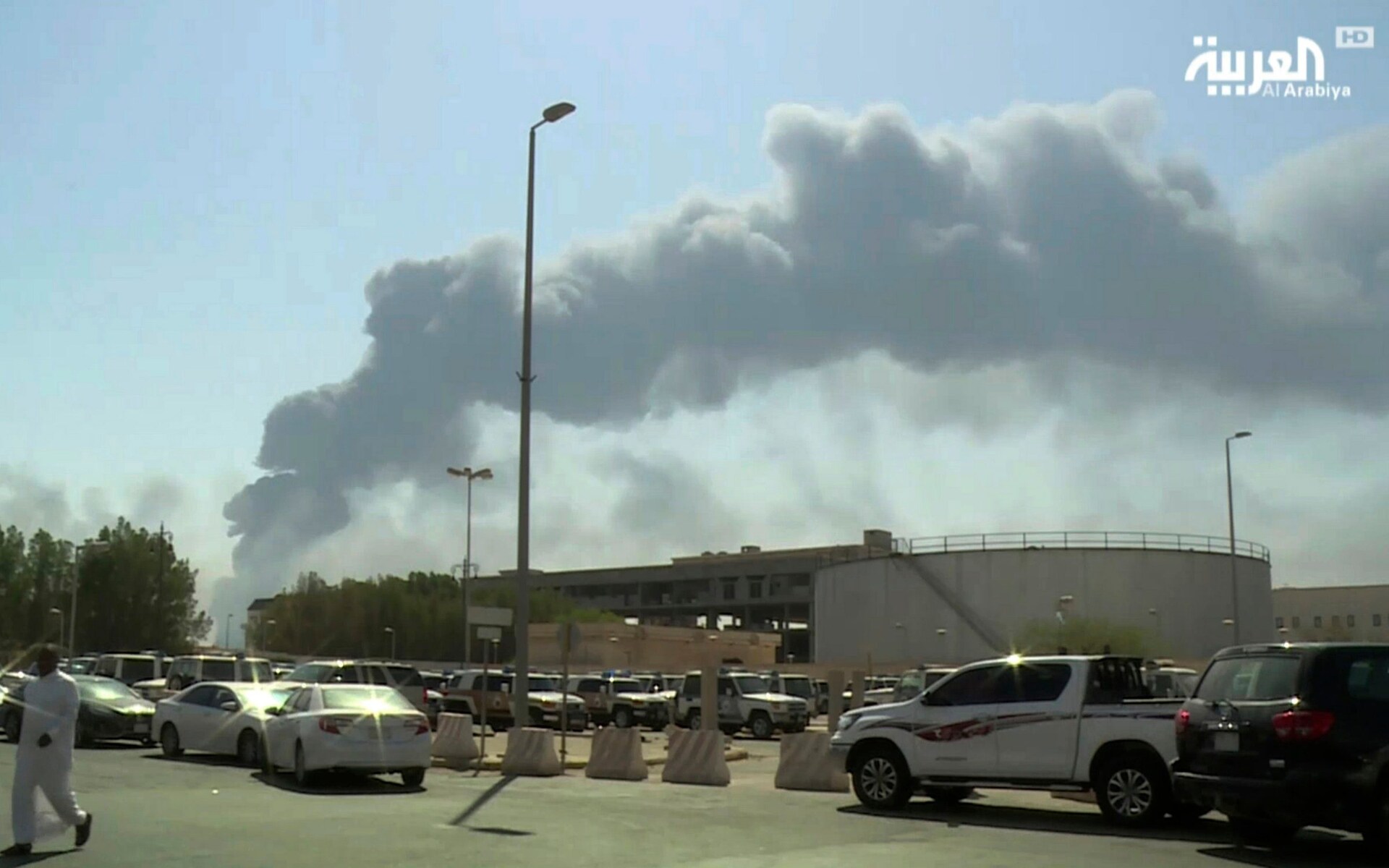 The smoke rising above above Saudi Arabia’s Abqaiq oil field might seem at first like the justification Riyadh has been waiting for.

If the White House is to be believed, Iran launched an unprovoked attack on the kingdom’s most important oil facilities. Saudi Arabia would be within its rights to strike its Iranian archrivals in response.

In an evening tweet, Donald Trump even appeared to give Saudi Arabia a say in whether the US would attack Iran. “[The US is] waiting to hear from the Kingdom as to who they believe was the cause of this attack, and under what terms we would proceed!”

Saudi Arabia has the power to bring fire and fury down on its most-hated foe but may be reluctant to actually use that power. The reality is the Saudis are deeply skittish about the prospects of any war with Iran because they know they will be Tehran’s main target.

If fighting breaks out between the US and Iran, the Iranians will have relatively few chances to strike America directly. They could target US ships in the Persian Gulf or order their Shia militia proxies to harass American forces in Iraq.

But most of their fire is likely to be aimed at the soft underbelly of Saudi Arabia, which is well within range of Iran’s missiles on the other side of the Gulf.

#14 [Permalink] Posted on 19th September 2019 16:55
What I don't understand is that Saudi has been spending billions every year since 80s if not earlier buying arms from UK and USA yet they are so useless. Also at any sign of problems they run to their rabb America to fight for them then why do they even buy arms? They too useless to use them and even if they could they pay America to defend them anyways.

Iran could overrun Saudi in a week if they wanted to.. Saudis can't even handle a few houthi rebels in Yemen despite throwing the kitchen sink at them. America is less and less dependent on Saudi oil so have no reason to defend except for the trillions Saudis will pay to do a few days job.

If buying world class weapons translated to battle readiness then this would not have happened!

I have worked in Saudia and if white people sell them bacteria from their stomach, the Arabs will buy it!

report post quote code quick quote reply
+1 -0Creative x 1
back to top
There is no Plan B!