👉 DhulHijjah 1439 Hilaal will be visible in Britain on Sunday, 12th of August 2018. We have setup public Astronomy centres and are working with numerous universities in Britain to arrange for private sighting (on premise). In case of adverse weather, we will be cooperating with centres in our neighbouring country of France.

Start the 10 most blessed days in Islam on the right footing by fulfilling the (communal) obligation of Moonsighting. We can help you arrange Moonsighting in your community, call us on +447956589613. 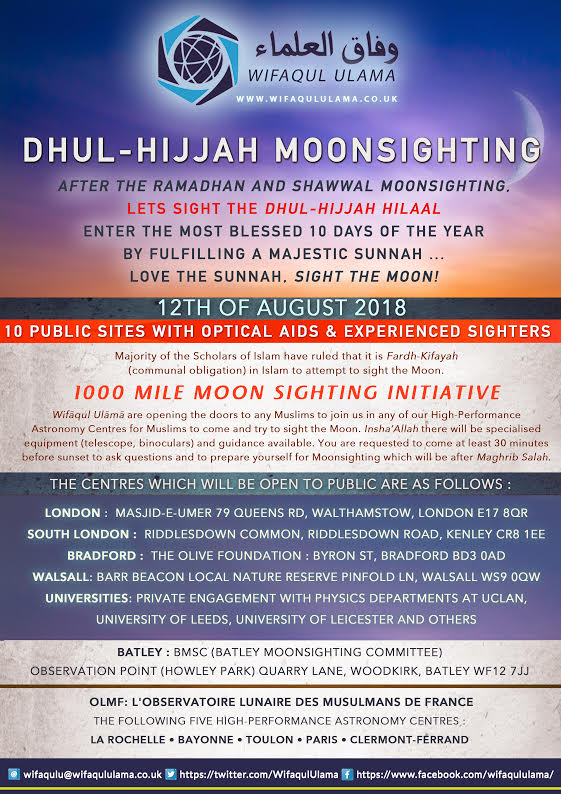 There is no Sunnah based #MoonSighting in #Türkiye

Hilaal not sighted in Malaysia, Indonesia Singapore or Japan

Is that a contradiction or typo?

Saudi will do Eid on 21st!
report post quote code quick quote reply
No post ratings
back to top
Actions are judged by intentions, so each man will have what he intended.
ابو محمد
View Profile Block User

DhulHijjah 1439 Hilaal will be visible in Britain on Sunday, 12th of August 2018. All the details about Moonsighting and Live streaming are present on this page:

Saudi Arabia has declared Hajj so why are we sighting the Moon in Britain?

❶  The Ulama in Haramain have given a Fatwa that Dhul-Hijjah is according to local Moonsighting, see video and translation here:

❷ Shaykh Saud Al-Shuraim gave a Khutbah in Masjidul-Haraam stating that countries should follow their (own) local Moonsighting, see video and translation here:

❸ Islam-QA (Shaykh Muhammad Saalih Al-Munajjid) advised British Muslims that they should follow their own local Moonsighting or countries close to it, see Fatwa here:

❹ The Earth is round and it has different time zones and even dates. If we were to travel to Indonesia, we would pray Fajar according to local time and follow (local) Moonsighting and the same is true for any other country such as Pakistan, America or even Saudi Arabia.

So is Hajj valid?

Of course it is. We would follow the local Salah times and local Moonsighting of our location. In Saudi Arabia, we will pray Salah and follow the Moonsighting as per the (local) Scholars without question and there is no doubt about its authenticity.

Join us for fulfilling the Fardh al-Kifaayah (communal obligation) of sighting the Hilaal in our country today. Please feel free to contact us in case of any further queries.

Moon was sighted, therefore Dhul-Hijjah will begin from Monday the 13th of August 2018 and Eidul-Adha will be on Wednesday the 22nd of August 2018.
report post quote code quick quote reply
No post ratings
back to top
There is no Plan B!