You have contributed 0.2% of this topic

#166 [Permalink] Posted on 25th November 2014 11:44
Sorry for going off topic, but there are tweets coming out of the Middle East promoting Kufr, since many of you tweet, maybe you can tweet back www.bbc.co.uk/news/blogs-trending-30181494

The BBC wrote:
#BBCtrending: Why some Arabs are rejecting strict interpretations of Sharia
A growing social media conversation in Arabic is calling for the implementation of Sharia, or Islamic law, to be abandoned.

Discussing religious law is a sensitive topic in many Muslim countries. But on Twitter, a hashtag which translates as "why we reject implementing Sharia" has been used 5,000 times in 24 hours. The conversation is mainly taking place in Saudi Arabia and Egypt. The debate is about whether religious law is suitable for the needs of Arab countries and modern legal systems.

Dr Alyaa Gad, an Egyptian doctor living in Switzerland, started the hashtag. "I have nothing against religion," she tells BBC Trending, but says she is against "using it as a political system". Islamists often call for legal systems to be reformed to be consistent with Sharia principles, and some want harsh interpretations of criminal punishments to be implemented. Dr Gad says she is worried about young people adopting the extremes of this kind of thinking. "You see it everywhere now, Islamic State is spreading mentally as well as physically" she told BBC Trending.

One of Dr Gad's tweets compared what action is taken against those who commit crimes under strict interpretations of Sharia to those who do so in Western societies. 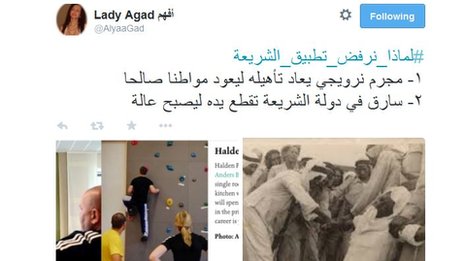 The Tweet says: "A thief under Sharia rule has his hand cut off and becomes a burden on society - and a Norwegian criminal is rehabilitated to become a good citizen"
report post quote code quick quote reply
+1 -0Informative x 1
back to top
Actions are judged by intentions, so each man will have what he intended.
ابو محمد
View Profile Block User

Now wherez that Biryani hater we had sometime back.. ;-)

#169 [Permalink] Posted on 3rd December 2014 19:40
Please donate something to a charity of your choice and encourage others by RT!
The winter is coming and for many children in those refugee camps the coldness could be fatal...
report post quote code quick quote reply
+2 -0Like x 1Winner x 1
back to top
10 Facts Qasim Rashid Needs to Stop Denying About Qadiyani non-Muslims: t.co/gLOo3Fb9HF
Follow me on Twitter! 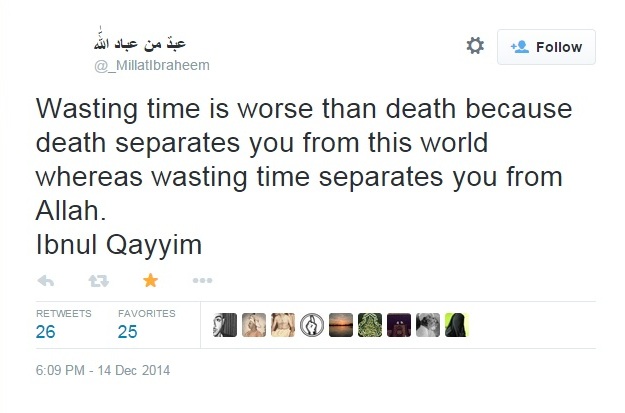 
The above is also a remedy to gain weight - Hadrath Ayesha radiyallahu anha used the above to gain weight before she left to the Prophet's peace and infinite blessings be upon him home ...this is mentioned in 5 minute Madrasah I have made a thread here somewhere.
report post quote code quick quote reply
+1 -0Informative x 1
back to top
http://www.theijtema.com - Because I Love To Waste Your Time®
View Profile Block User

#176 [Permalink] Posted on 16th December 2014 18:45
Extremely relevant due to today's School Massacre in Peshawar. Quite a few Twitterusers in my timeline lost someone they knew and loved...


This is the top advice for everyone but esp. for neo Sufis.
report post quote code quick quote reply
+2 -0Like x 2
back to top
http://www.theijtema.com - Because I Love To Waste Your Time®
View Profile Block User

#179 [Permalink] Posted on 16th December 2014 20:13
This top tweet is from the time I was reading Disciplining the Soul by Ibn Jawzi (rh) until one mod or mods decided to get romantic with me.

#180 [Permalink] Posted on 16th December 2014 20:19
And because I broke up with the mod who tried getting romantic with me, here's a little advice to soften the heart.