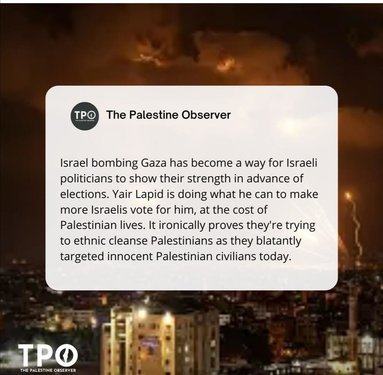 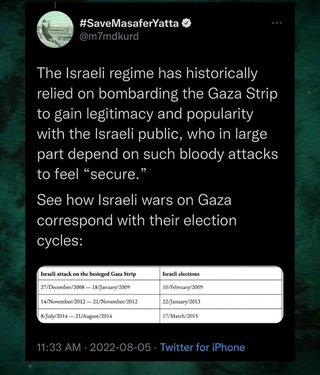 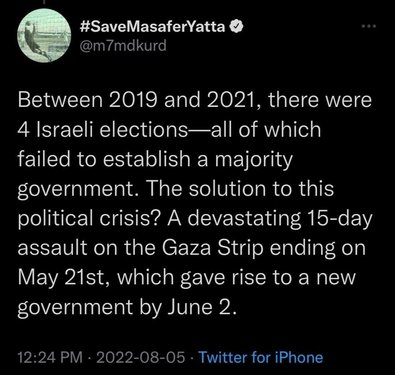 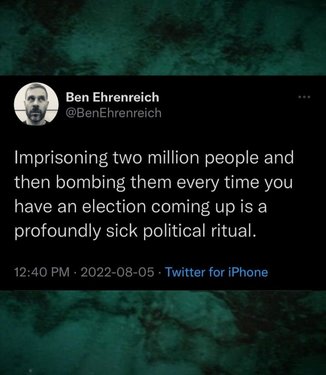 17 years of blockade, of almost total control over who/what goes in/out of the Gaza Strip. 17 years of controlling Gaza's airspace, sea access, electricity. But none of that matters to the pro-occupation. As long as he can find a way to blame the Palestinians for basically everything.

The right seems to think that the moment Israeli settlers were evacuated from the Gaza Strip in 2005, the occupation there ended. But this is a lie. The occupation of Gaza is as strong and all-encompassing as ever.

Just ask the more than 2 million Gazans who are forced to live from one round of IDF aerial bombings to the next with almost no ability to rebuild their lives in between, since we're the ones who control what building materials, and how much, can be brought in to the Strip.

Many Israelis don't know that very basic fact. But Gazans are fully aware of it.

And so are the soldiers:
"We use a great deal of violence against Gaza. During the rounds [of fighting] themselves, we use a lot of violence and sow destruction, and it’s part of the same strategy. Now, I see [those rounds of fighting] as having to 'mow the lawn' every few years, and in-between, Gazans have to be kept on a very short leash, not allowed too many exits and entries, not allowed to do many things we’d take for granted, like being able to fish wherever we feel like, or being able to fly. It's a prison." 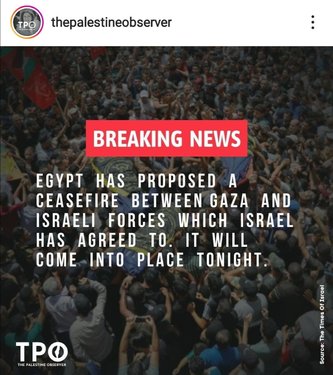 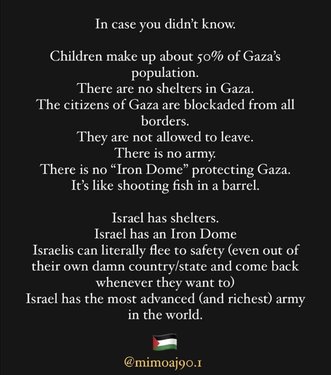 Loading tweet
report post quote code quick quote reply
No post ratings
back to top
Actions are judged by intentions, so each man will have what he intended.
ابو محمد
View Profile Block User 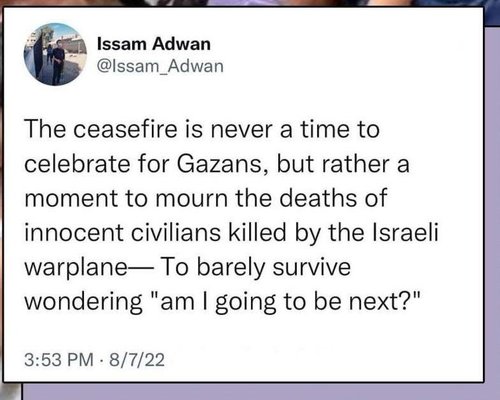 Israel admitted responsibility for killing five Palestinian children in an air strike on the Fallujah cemetery in the town of Jabalia, in the northern Gaza Strip, on 7 August, after it had initially claimed they were killed as a result of a missile fired by Islamic Jihad.

"Israeli defence officials have confirmed that Israel was responsible for the deaths of five minors killed on the last day of the recent hostilities with Islamic Jihad this month," reported Haaretz newspaper today.

"An army inquiry into the incident, which occurred on August 7 in the Al-Faluja Cemetery east of Jabalya, has concluded that the minors were killed by an Israeli airstrike, several defence sources have confirmed," added the newspaper.

It also reported that "Immediately after their deaths, several senior officers said the five were most likely killed by a misfired Islamic Jihad rocket."

On the other hand, the newspaper indicated that an army investigation concluded that another incident, which resulted in the killing of eight Palestinian civilians, including children, that occurred on a day earlier was a result of a "misfired Islamic Jihad rocket."

The newspaper stated: "The Palestinians had claimed the eight were killed by Israel, but the army quickly released evidence indicating that they were actually killed by Islamic Jihad."

Israeli army spokesman Ran Kochav said: "We didn't conduct any strikes in that area, not in urban areas and not at that time."

Over the course of three days from 5-7 August, the Israeli army launched raids on the Gaza Strip, which, according to the Palestinian Ministry of Health, resulted in the death of 49 people, including 17 children and four women, and 360 injuries.


Quote:
Speaking to Al Jazeera after the August 7 killings, Hamed Najim’s mother noted the attack came just hours before a ceasefire, which has since held, went into effect.

“Just two hours before the truce was announced, he told me he would go out for five minutes with his cousins,” she said. “Moments went by and then we heard a bombing. We ran out to find my son and his three cousins. They were all cut up into pieces.”
Al-Jazeera
report post quote code quick quote reply
+1 -0Informative x 1
back to top
Fragrance of Musk
View Profile Block User 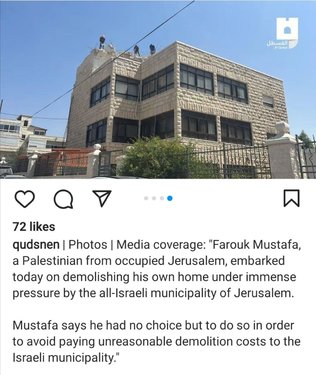 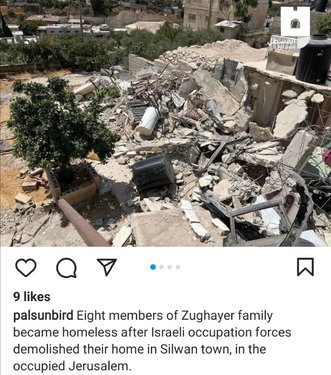 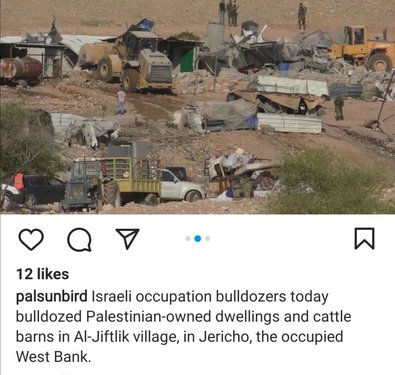 #371 [Permalink] Posted on 18th August 2022 18:55
Turkey, Israel to restore full diplomatic relations
Move comes after gradual efforts to restore ties, including a visit by the Israeli president to Turkey in March.

Turkey and Israel have agreed to restore full diplomatic relations and will return ambassadors to each other’s countries following a gradual improvement in relations.

The announcement on Wednesday followed a conversation between Israeli Prime Minister Yair Lapid and Turkish Prime Minister Recep Tayyip Erdogan. It comes four years after the two countries expelled ambassadors over the killing of 60 Palestinians by Israeli forces during protests on the Gaza border against the opening of the United States Embassy in Jerusalem.

“It was decided to once again upgrade the level of the relations between the two countries to that of full diplomatic ties and to return ambassadors and consuls general,” a statement from Lapid’s office said.

“Upgrading relations will contribute to deepening ties between the two peoples, expanding economic, trade, and cultural ties, and strengthening regional stability,” it added.

Turkish Foreign Minister Mevlut Cavusoglu told reporters in Ankara that the appointment of ambassadors was “one of the steps for the normalisation of ties”. “Such a positive step came from Israel, and as a result of these efforts, and as Turkey, we also decided to appoint an ambassador to Israel, to Tel Aviv,” he said.

Cavusoglu added that the move did not mean that Turkey would be abandoning the Palestinian cause.

“We have always said we will continue to defend the rights of Palestine, Jerusalem and Gaza. It’s important that our messages are conveyed at the ambassadorial level in Tel Aviv,” he said.

The thaw in ties comes after more than 10 years of tensions. A visit to Turkey by Israeli President Isaac Herzog in March, followed by visits by both foreign ministers, helped warm relations.

“In one year, there will be a presidential election here in Turkey. But with inflation at more than 70 percent, Ankara wants to attract investment from regional countries. There are security challenges, too, in Syria and the eastern Mediterranean basin. Turkey sees Israel as a strong player, and for Israel, Turkey is seen as a balancing power in a region threatened by Iran.”

But even with the full restoration of diplomatic ties, the Palestinian issue was likely to remain a “contentious difference” between the two countries, he added.

The move, which comes as Israel has sought to improve ties with regional powers, was agreed upon two years after the so-called Abraham Accords which saw relations normalised between Israel, Bahrain, the United Arab Emirates (UAE) and Morocco.

Media coverage: "Offices of at least 7 Palestinian civil and human rights organizations were stormed and sabotaged by Israeli forces in Ramallah early this morning. The forces also confiscated office items and machinery from the headquarters."
These photos were taken from Defence for Children International, Palestine. 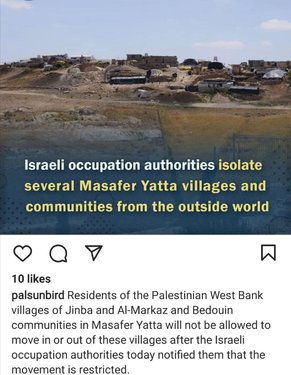 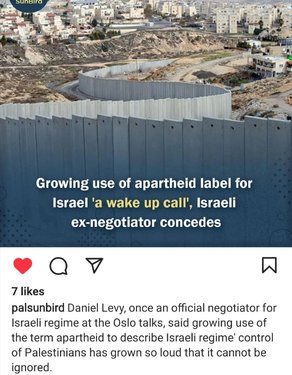