When the Muslim migrated to Madina there was severe shortage  of water which troubled the Sahabah (RA). There was only one sweet water well (known as the well of Rauma) owned by a Jew who used to charge astronomical amounts of money for his water.

Sayyidina Rasul-ullah (Sallallaho Alaihe Wassallam) promised house in paradise for the one who buys this well and dedicates it to the believers for their water needs. Sayyidina Uthman Ibn Affan (RA) went to the Jew and offered to purchase his well which he declined.

Nobody came to fill on the day of the Jew so he eventually sold his half share due to lack of business.

Sayyidina Uthman Ibn Affan (RA) dedicated the well for free water and it continues to pump water even to this day. Over 1400+ years due to abundant water the area around the well become fertile and developed a garden of high quality dates with as many as 1550 trees during the Ottoman rule of Madina. The entire area was endowed to Muslims by Sayyidina Uthman Ibn Affan (RA) and he never took a penny while the profits keep growing and growing. The Accounts (today) are kept in a Bank Account in Madina even today of all the profits in the name of Sayyidina Uthman Ibn Affan (RA).

Saudi Government has decided to build a Hotel with this money and the yearly earning are estimated to be 50 million Saudi Riyals. Half of the profits will be spent on the poor while the other half (of the profits) will be deposited back into the Account. 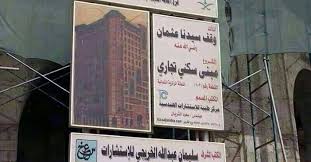 Write a comment
Latest Blog Entries
When will Ramadhan 2021 begin?