Are we allowed to wear ''Greek key style'' jewellery?

In the name of Allah the Magnificent

With extensive research into the concept behind that pattern one has come to the conclusion that Greek key which is a rectilinear meander style design is allowed for females to wear but is Makruh (Disliked in Islam). Because they contain a slight essence of the ancient Greek Religion and the modern freemasonic order.

Because they are mere, intricate interlocking patterns which do not represent or show any images of animate things (Fatawa Mamoodiyah Vol. 14 Pg 399 Vol.5 90). Nor can be fully established that they are symbolic or connected to the false ancient Greek doctrine. Though in my research I found that most historians feel that is it based on the bogus and untrue myth of the labyrinth of the Minotaur, because the patterns resembles a maze. In my humble opinion this is hypothesis of the historian and it is not established whether it is symbolic to the ancient Greek religion. .

Further research found that the Freemasonic plaque is also decorated with such a design (See pic below) but again the freemasonic plaque also uses shapes such as the square, which is symbolic to their order. But this same pattern is used the world over by everyone. Even many children who study art in school have invented that design when asked to create a pattern for the art work. It was pure guess work 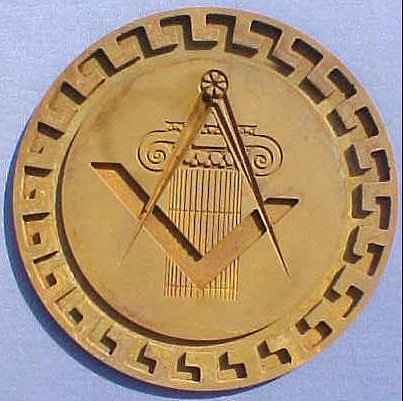 "A Greek Key or meander ornamental motif surrounds the diameter of this plaque with continuous bands arranged in rectilinear forms. Some historians feel that the Greek key has its basis in the Greek myth of the labyrinth that imprisoned the Minotaur. A meander is a running ornament consisting of a fret design with many involved turnings and an intricate variety of designs." (See this link)

One was unable to find any connection between this pattern and any of the Greek deities, thus one concluded that the patterns were simply invented and were popular in that part of the world at that time and are now prevalent everywhere. Thus, in conclusion a Muslim female may were such jewellery but it is far better and recommended to avoid.

As a finale note one wishes to say that it is better for men not to wear such silver rings that have a ''Greek key style'' design. The reason for one to say this is simply the fact that the ring should be worn for the Sunnah of Rasullulah and not with the intention of beauty. I say this because if one wears the silver ring with ''Greek key style'' pattern engraved on it then this does not really resemble the Sunnah of the noblest and greatest of mankind but is a fashion accessory. And the Sunnah is been used to mask this. The non Muslim people who are not acquainted with what the Sunnah of the ring is (as all the Muslim brother who wear one are) and by them seeing a Muslim man wearing such a ring will it is highly probable that they only see that he is following their way of life in jewellery. Thus to uphold and defend the Sunnah it is beter that we avoid wearing such "designer" rings.