Forum Index » Sharing & Voicing  » Sharing Portal  » The Light SideCoronavirus (COVID-19) Conspiracies, Wild Theories, Rant, Moan Thread
Forum Menu - Click/Swipe to open
Show Forum Menu
Recent Posts
You've been Googled
6 hours ago by Servant.Of.Allah
Americans vs Canadians?
12 hours ago by Intrepid
Leprosy?
19 hours ago by Muadh_Khan
Makkah News and Updates
19 hours ago by abu mohammed
On Kashmir
22 hours ago by Muadh_Khan
Reforming madrasa vs reforming school
23 hours ago by abuzayd2k
sunniforums
Yesterday by Concerned
Coronavirus: Islamophobia
05/07/2020 by abu mohammed
Covid-19 and Jummah bookings
05/07/2020 by abu mohammed
Full list of BBcodes?
04/07/2020 by Yasin
Recent Top Rated Posts
+8 - Re: Mufti Ismail Menk
by Yasin
+5 - Re: Makkah News and Updates
by abu mohammed
+5 - Re: Hadith? Black People and signs of the Mahdi.
by habeeba
+5 - Re: On Kashmir
by TechMan
+5 - Re: Just remembered...
by Moonlight
+5 - Re: The Ottoman Empire
by Muadh_Khan
+5 - Re: Osama Bin Ladin "Shaheed" by Imran Khan
by bint e aisha
+4 - Re: Niqab and the Hanafi Madhab
by Muadh_Khan
+4 - Re: Why does Yasir Qadhi get so much hate ?
by Abdur Rahman ibn Awf
+4 - Re: Fat destroyer challenge
by abu mohammed
Top Members
Forum Menu
Search Forums Memberlist
▼
Statistical Pages
» Recent Replies » Most Appreciated » Popular Threads » Polls / Surveys » Top Rated Posts » Worst Rated Posts

This remark was made by Health Minister Yaakov Litzman last week, after Yaniv Kalif of the Hebrew-language news website Hamal asked him whether Israelis will be forced to remain under lockdown until the holiday, which begins April 8. Litzman’s ignorant answer was not met with uproar.

Is it reasonable for a religious man, a member of the Gur Hasidic community, one of the most conservative Jewish communities in the world, to head the Health Ministry as it faces the biggest crisis Israel has ever known?

It goes without saying that the solution to this crisis will, of necessity, come from science, an area of human knowledge to which Gur Hasidim are less than sympathetic.

The truth is that Litzman’s unfortunate comment flew under the radar because Israel has always followed a twisted hierarchy: Religion is superior to secularism, and religious actions are more important than secular ones.

In normal times, this narrative leads to infuriating nationwide directives: We are subordinate to kashrut laws that raise the cost of living and make us captive to corrupt kashrut supervisors. Two parties prohibit half of the population from running for the Knesset on their slates, and not even the High Court of Justice has been able to force them to do so. For these same religious reasons, civil marriages are prohibited in Israel.

Even in times of crisis, religion rules. Secular group activities, including those with fewer than 10 participants, are shut down without a second thought and without asking too many questions. No studies, no extracurricular activities, no public readings, no foreign-language courses, no cultural events. But group worship is still kosher. Not even data showing that over a third of the coronavirus patients who were diagnosed with the illness last weekend had visited synagogues made a difference.

Yemeni scholar: Jews, Israel and US made coronavirus to shut down Mecca

Yemeni scholar Ibrahim Al-Ubeidi delivered a sermon on Friday in which he claimed that Jews and Americans created COVID-19 with the intention of closing down the Islamic holy sites of Mecca and Medina.

Friday Sermon by Yemeni Scholar Ibrahim Al-Ubeidi: Coronavirus Is Part of a Plan by the Jews, Israel, U.S. to Control Mecca, Medina; The Saud Clan Is a Jewish Family Brought into Power in Order to Judaize These Cities

— MEMRI (@MEMRIReports) March 29, 2020
He went on to say that not only is the pandemic because of this secret plot, but the Saudi Royal family is secretly Jewish and that they are all descendants of a Jew called Mordechai who lived in Iraq, the Middle East Media Research Institute (MEMRI) reported in a tweet on Sunday.

Al-Ubeidi went on to praise the late Hussein Badreddin Al-Houti for allegedly being “the only one in the Islamic world” to warn of the possibility that Jews and Americans could use viruses and germs to shut down holy sites.

Saudi authorities ordered an end to mass events across the kingdom in an attempt to curb the spread of the novel coronavirus. The same step has been taken by other religious leaders and organizations around the world, including the Vatican in Rome and the Chief Rabbi of the State of Israel.

The sight of the Kaaba in Mecca being almost empty is painful for many Muslims, leading some to feel as if God had rejected them.

Al-Ubeidi went on to ridicule the Saudi policies of seeking better ties with Israel and the US, which include a new openness to some aspects of Western culture, by cynically asking if the virus is not present in dance halls where women and men dance together and only in holy sites of religious worship. The Kaaba in Mecca and the Mosque built by the Prophet of Islam, Muhamad, in Medina are the two holiest sites in Islam, the third being the Al-Aqsa mosque in Jerusalem. Saudi Arabia views itself as the guardian of these two holy sites, Jordan sees itself as the guardian of the third
report post quote code quick quote reply
+1 -0Informative x 1
back to top
Actions are judged by intentions, so each man will have what he intended.
ابو محمد
View Profile Block User

What's the official conspiracy theory with Muslims regarding the coronovirus?

Surprisingly I haven't seen much on Facebook, whatsapp, etc. I would have thought a global shut down and all the rest of it would have fueled a few theories.
report post quote code quick quote reply
No post ratings
back to top
xs11ax
View Profile Block User 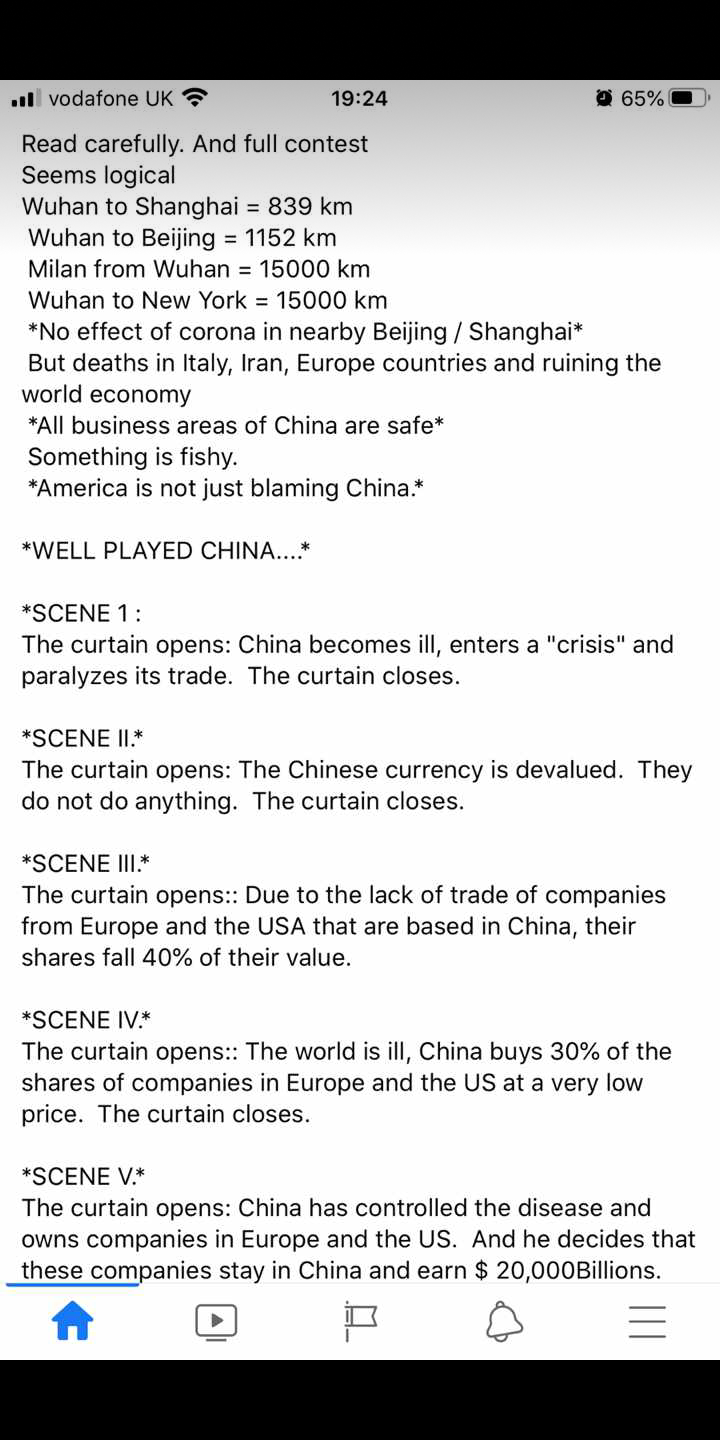 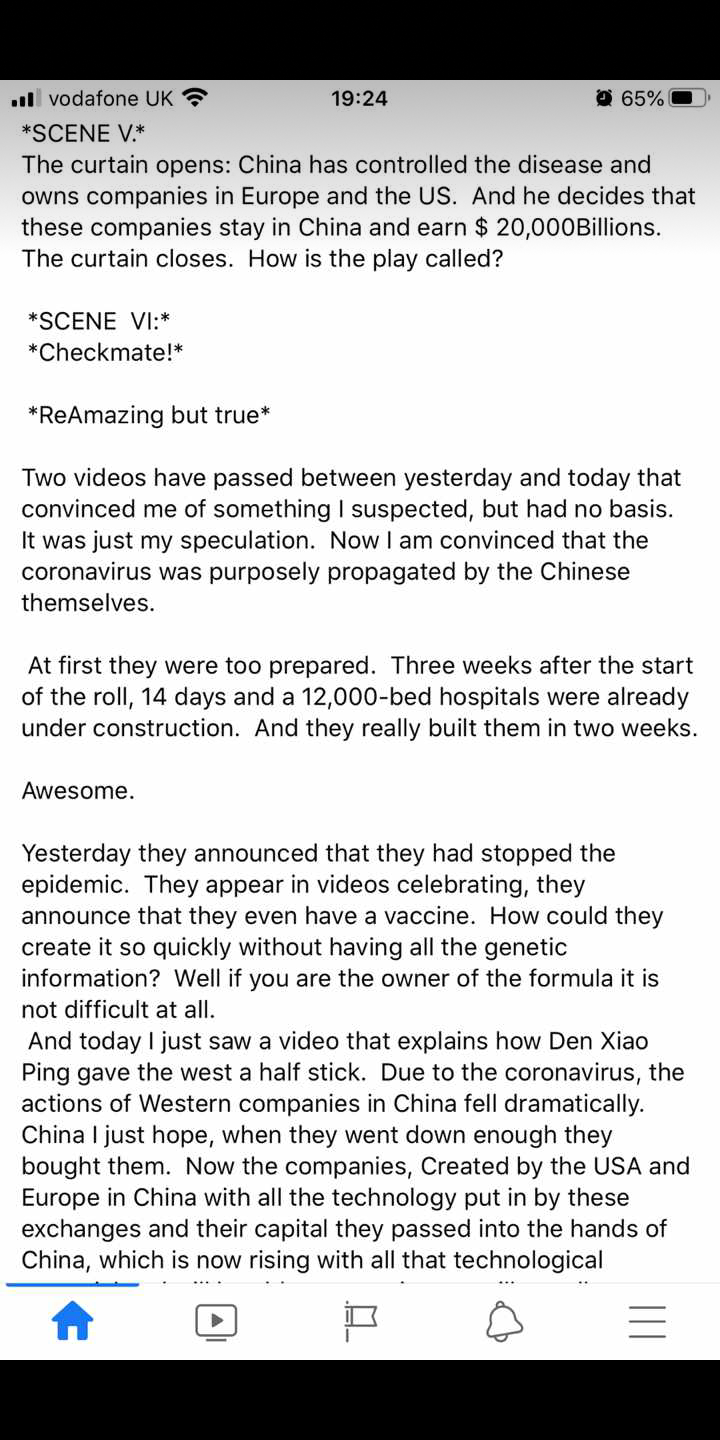 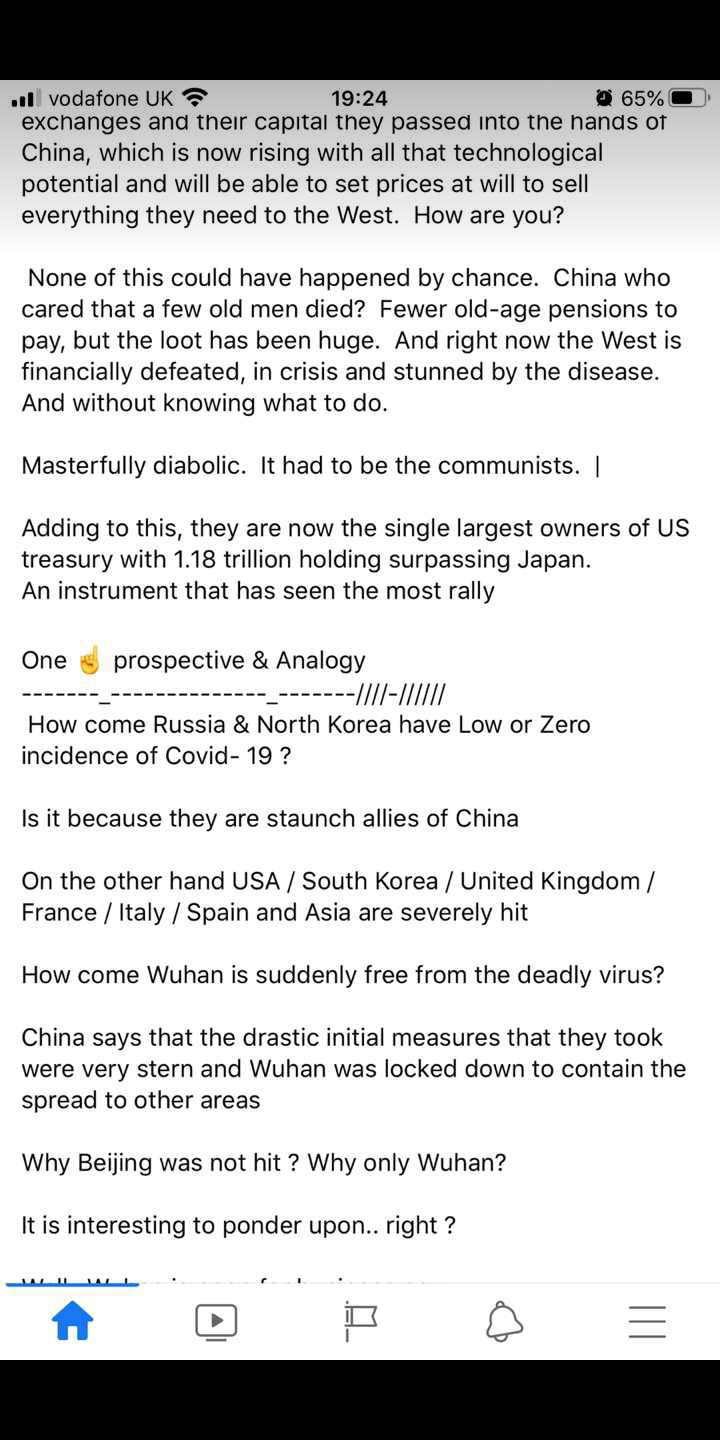 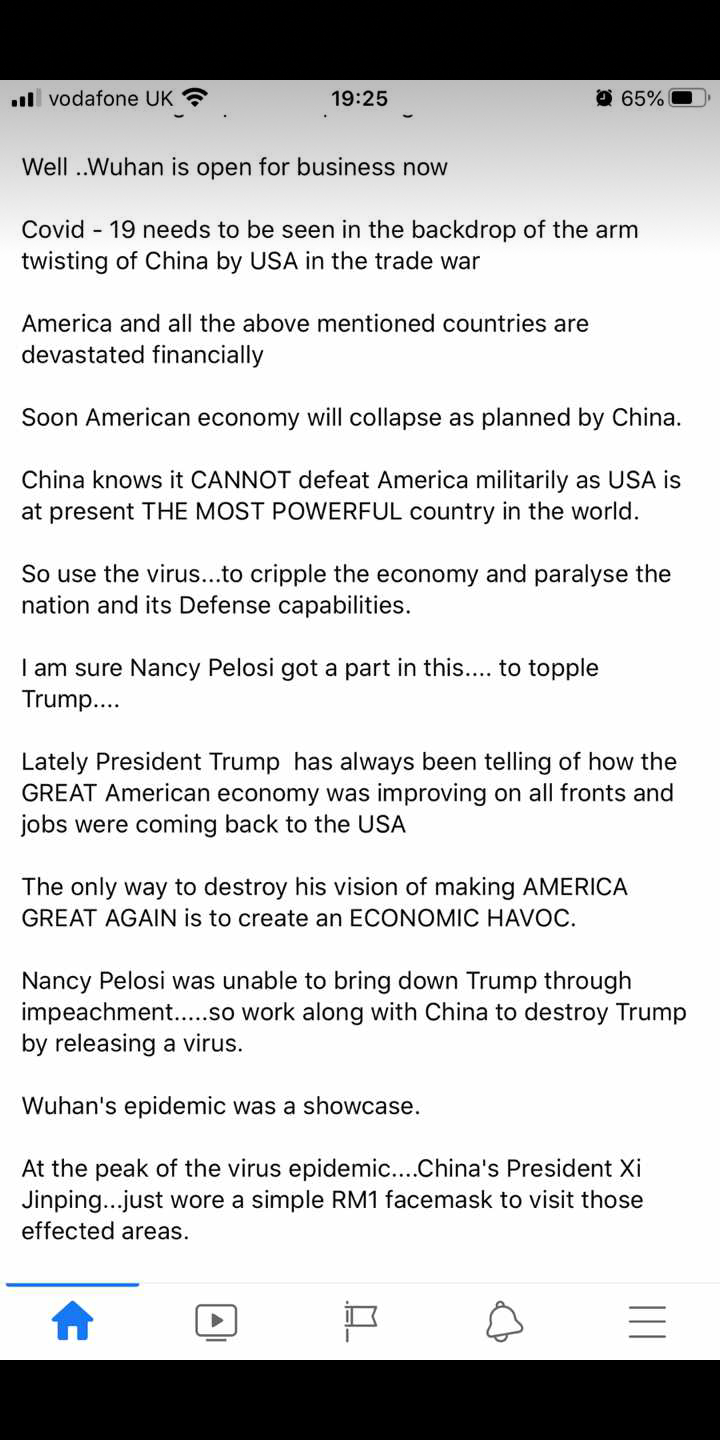 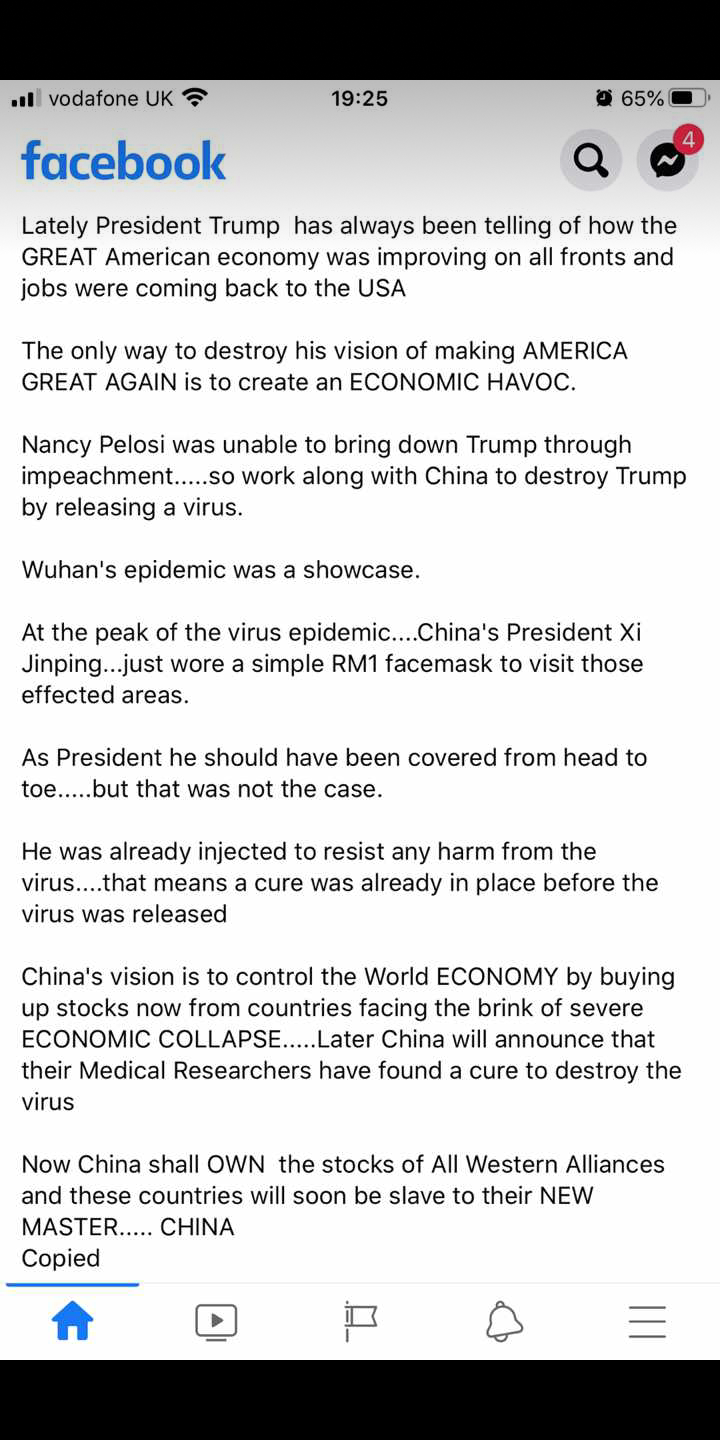 Downloads: 10
[566.96 kB]
report post quote code quick quote reply
No post ratings
back to top
Actions are judged by intentions, so each man will have what he intended.
ابو محمد
View Profile Block User

#110 [Permalink] Posted on 29th March 2020 19:12
One usually reaonable Shaykh said that this is all a way to get healthcare to boil down to vaccines and Bill Gates will be one of those who benfit the most as he is heavily invested in that field.

#111 [Permalink] Posted on 29th March 2020 21:40
I just watched the trailer of a movie released in 2011. The things I watched in that trailer are hauntingly similar to the current situation in the real world. There is something really fishy about this virus.
report post quote code quick quote reply
No post ratings
back to top
The world does not forgive the weak.

#112 [Permalink] Posted on 29th March 2020 21:52
What is reality and what is a conspiracy theory. Can you differentiate between the two? Are you sure you know?
report post quote code quick quote reply
No post ratings
back to top
The world does not forgive the weak.

I'm amazed how they managed to shut down the world just like that.
report post quote code quick quote reply
No post ratings
back to top
xs11ax
View Profile Block User

#114 [Permalink] Posted on 29th March 2020 23:55
So is this how life is going to be till they find, mass produce, and mass administer the vaccine? At best that would take at least 1.5 years.
report post quote code quick quote reply
No post ratings
back to top
xs11ax
View Profile Block User


I guess all eyes are on Wuhan. They have now allowed people back in. Let's see if anyone gets reinfected.
report post quote code quick quote reply
No post ratings
back to top
Concerned
View Profile Block User

Can China be trusted to tell the truth? Have their claims been verified?
report post quote code quick quote reply
+0 -0Agree x 1
back to top
xs11ax
View Profile Block User

#119 [Permalink] Posted on 30th March 2020 04:23
xs11ax wrote:
View original post
I would suspect that the China figures are low, so as to downplay the effect of the disease to the population.

The Mufti wondering about low amount of cases in N. Korea and Russia really made me laugh though.
As if those 2 countries are beacons of truth in the best of times.

I also assume that the US figures are very low, because we're currently testing only people that are suspected of being positive. Until they open testing to establish surveillance testing we won't get an accurate picture.
report post quote code quick quote reply
+0 -0Agree x 3
back to top
In Need of Teaching
View Profile Block User 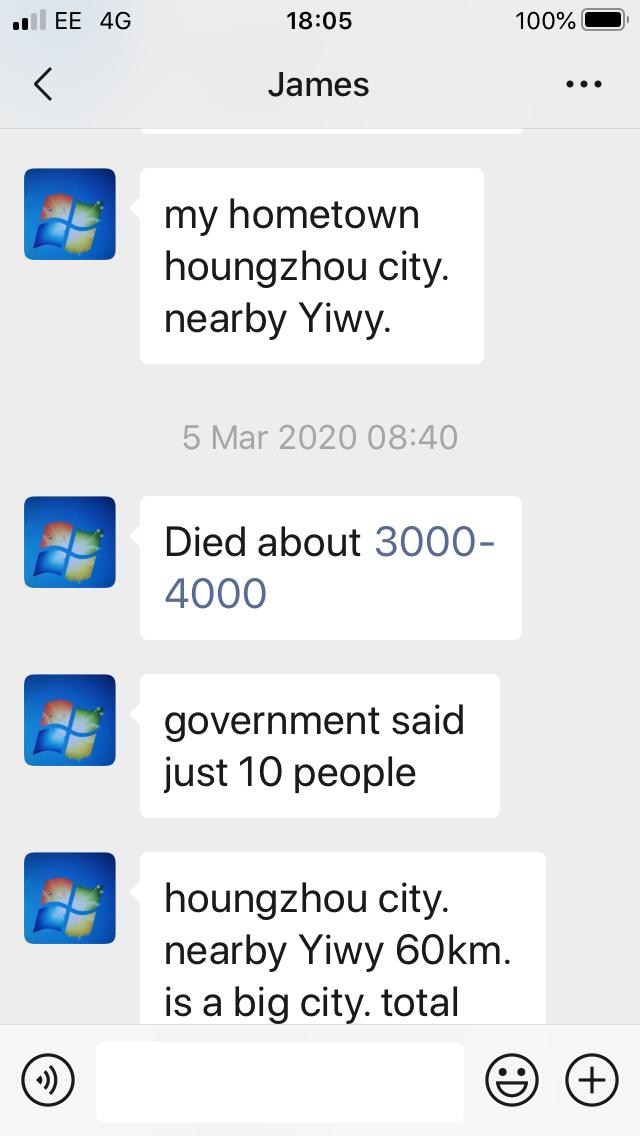