Forum Index » Private  » Private Groups  » Members Research GroupQibla Direction
Forum Menu - Click/Swipe to open
Show Forum Menu
Recent Posts
China vs India 2020: Ladakh and Sikkim
12 mins ago by abuzayd2k
Tribute to Shaikhul Hadith Moulana Haroon Abasoomar Rahimahullah
34 mins ago by abuzayd2k
Two types of Migration.
2 hours ago by Rajab
Ignore User
2 hours ago by xs11ax
We are not fit to rule.
3 hours ago by xs11ax
Coronavirus
5 hours ago by Moonlight
Donate for FREE via Amazon
11 hours ago by xs11ax
There Is No Racism In Islam!
11 hours ago by Muadh_Khan
Hadith Specialisation Course 2020
13 hours ago by Darulilm2018
How soon do you think The Mahdi will arrive?
17 hours ago by mkdon101
Recent Top Rated Posts
+6 - Re: Re: Shawwal 1441 Moonsighting: Eid around the World
by Pakora
+6 - Re: What to do with taweez? (Sihr).
by Abdur Rahman ibn Awf
+5 - Re: Who are the Greatest living Deobandi Scholars?
by mSiddiqui
+5 - Re: Karguzari (Report) on Islam in Damascus
by Muadh_Khan
+5 - Re: Is marriage predestined?
by xs11ax
+5 - Just remembered...
by xs11ax
+4 - Re: Coronavirus
by Moonlight
+4 - Re: Re: Shawwal 1441 Moonsighting: Eid around the World
by Muadh_Khan
+4 - Re: Two Lockdowns in sub-continent.
by bint e aisha
+4 - Re: Is marriage predestined?
by bint e aisha
Top Members
Forum Menu
Search Forums Memberlist
▼
Statistical Pages
» Recent Replies » Most Appreciated » Popular Threads » Polls / Surveys » Top Rated Posts » Worst Rated Posts


Any likes, ratings etc for the reminder to go on this post please.

www.muftisays.com/forums/27-sharing-portal/5907-makkah-ne...
report post quote code quick quote reply
No post ratings
back to top
Actions are judged by intentions, so each man will have what he intended.
ابو محمد
View Profile Block User

#92 [Permalink] Posted on 28th May 2014 09:31
This is about to happen in about an hour. (10:28am) Shame theres no sun shining here in London.
report post quote code quick quote reply
+1 -0Informative x 1
back to top
Actions are judged by intentions, so each man will have what he intended.
ابو محمد
View Profile Block User


No sun in Midlands, raining...

Disclaimer: Although my results are correct but I don't think that this translation is accurate so if you are Trigonometry buff please look at the forumula.

Shaykh (Mufti) Rasheed Ahmed Ludhyanwi (RA) in his book Ahsanul-Fatawa has published 9 separate ways of finding Qiblah direction. His student Shaykh (Mufti) Sultan Alam (HA) [Head of Astronomy, Jamiatur-Rasheed] states that for laymen method 2 is the easiest to understand and follow and this is also found in most modern Astronomy books, so here is the English translation for the example mentioned in the book (Karachi).

In order to calulcate the Qiblah direction you will need to know four things:

You can easily find these using Google these by using the following terms:

Before proceeding further I would like to add a small detail here which is not explained properly in the book as follows:

Please also that all my firgures are in decimal formation! If you get your Longitudes mixed up with Latitudes you will have some serious problems, pay attention to directions!

Obtain the difference in Longitude between your city and Makkah by subtracting the Higher Longitude from the Lower Longitude and we will call this number F.

Remember that you actually have a NEGATIVE (-) so watch what happens!

Remember that you actually have a NEGATIVE (-) so watch what happens!

There are two significant things to look at in your number:

report post quote code quick quote reply
+7 -0Like x 2Informative x 5
back to top
There is no Plan B!

Shaykh (Mufti) Rasheed Ahmed Ludhyanwi (RA) had created a graph by hand in 1969 for worldwide Qiblah directions and this was one of a kind graph for Qiblah directions. In 1983 Engineer Basheer Ahmed Baghwi tried to create an A4 size version of the graph to make it accessible to laymen.

report post quote code quick quote reply
+6 -0Informative x 6
back to top
There is no Plan B! 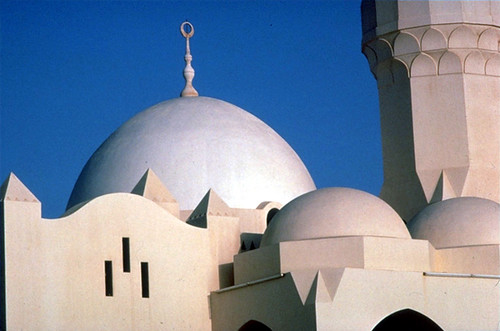 TAIF — Many residents of Taif who depend on Google Earth to work out the direction of the Qiblah (the direction of the Kaaba toward which Muslims face when praying) were surprised to find most local mosques were facing the wrong way when holding prayers, Makkah reported.

Awad Al-Thubaiti said before such technology became popular, people never questioned the direction of the Qiblah in mosques.

The only time when people had to work out the direction of the Qiblah was when they had to pray outside of the mosques.

Al-Thubaiti said: “New hi-tech methods have provided us with a more accurate calculation of the Qiblah direction through satellite technology.

“The most widely used of these methods is Google Earth.”

He added that Google Earth is used to define the direction of the Qiblah by locating the Kaaba and the mosque the user is in.

The user would then draw a line from the mosque he is in to the Kaaba to determine the Qiblah’s direction.

“The difference differs from mosque to mosque, but the most accurate of them all is Abdullah Bin Abbas Mosque.”

Taif Ministry of Islamic Affairs Director Abdulaziz Al-Mudara said the Board of Senior Ulema (scholars) has issued a fatwa (religious edict) in 1988 stating that facing the Qiblah in prayers is not an accurate measure but a close approximation.

The fatwa clarified that the most important thing for a correct prayer is for the Muslim to be facing the right direction.

However, people believed the ministry’s response was dismissive and was too heavily reliant on a 27-year-old fatwa over modern and accurate technology.

In response, Al-Mudara said the ministry does use new accurate and specialized technology in determining the direction of the Qiblah.

He said: “The devices we have are more accurate than Google Earth.

“If we found any discrepancies in the current and new calculations of the Qiblah’s direction, we will simply readjust the direction of the mosque’s prayer mats.

“The same fatwa also said that if a mosque had the wrong Qiblah direction, there is no need to demolish it and only change the direction its prayer mats points toward.”
www.muftisays.com/forums/27-sharing-portal/5907-makkah-ne...
report post quote code quick quote reply
No post ratings
back to top
Actions are judged by intentions, so each man will have what he intended.
ابو محمد
View Profile Block User

You got another chance brother...

See here for details
www.muftisays.com/forums/27-sharing-portal/5907-makkah-ne...
report post quote code quick quote reply
No post ratings
back to top
Actions are judged by intentions, so each man will have what he intended.
ابو محمد
View Profile Block User

Posted via the Muftisays Android App
report post quote code quick quote reply
No post ratings
back to top
There is no Plan B!

Quote:
from the northeast horizon and continues moving until it comes directly overhead on the Kaaba at 12:18 p.m. The Kaaba will lose its shadow for a brief time.

Makkah is currently GMT+3
report post quote code quick quote reply
No post ratings
back to top
Actions are judged by intentions, so each man will have what he intended.
ابو محمد
View Profile Block User

Noman Ali Khan on Qiblah direction and things we may not have known.

A beautiful verse in the Quran is also mentioned where Allah says He looks at our Iman! A good listen.
report post quote code quick quote reply
No post ratings
back to top
Actions are judged by intentions, so each man will have what he intended.
ابو محمد
View Profile Block User

This is calculated using the Havesine Formula and it uses the great-circle distance between two points – that is, the shortest distance over the earth’s surface. Your input will be as follows:

Havesine Formula causes problems when the distances are really really close together but most of us don't have any real issues with that. It also does not take Magnetic declination into account but that is also not an issue for Muslims while facing Qiblah.

An Emirati astronaut’s challenge:
how to face Makkah in space

Astronauts at the International Space Station orbit the Earth every 90 minutes. This means they will witness a staggering 16 sunrises and sunsets every day.

So how will the UAE’s first Emirati astronaut, who is a Muslim, pray five times a day and figure out which way is Makkah?

The answers can be found in a prayer booklet issued by Dubai’s Islamic Affairs Authority who have recommended Hazza Al Mansouri follow the timings of the holy city of Makkah in Saudi Arabia.

Muslims must pray five times a day at times dictated by the height of the sun. When aboard a station orbiting the Earth at 27,500kph, which direction must Maj Al Mansouri face when expressing his faith?

“Astronauts in space witness 16 sunrises and 16 sunsets a day, so it becomes unclear when they could pray or fast,” said Dr Mohammed Al Ahbabi, director general of the UAE Space Agency.

Malaysian astronaut Sheikh Muszapher Shukor, who travelled to the ISS during Ramadan in 2007, faced a similar dilemma. As a devout Muslim, he wanted to pray on time while facing Makkah.

“When Sheikh Muszapher Shukor visited us in 2015, he told us how before his trip he was asking how he could pray on time while in space,” said Dr Al Ahbabi.

“He told us he was issued a fatwa to follow the prayer timings of the location of the launch, which was Kazakhstan.”

Maj Al Mansouri will also be heading to space from Kazakhstan but has been advised to prioritise following the prayer timings adhered to in Makkah.

The booklet described it as “the most suitable” time for prayers and fasting for astronauts visiting the ISS — of all the options.

Makkah’s timings are more favourable than Kazakhstan because Maj Al Mansouri will not remain above the central Asian country for the duration of his 8-day space mission.

“Since it [the capsule] will detach from Earth, and will be rotating around it very fast, and in different routes, there is no point of following the timings of the launch country, and Makkah as the land where the revelation [message of Islam] was inspired, takes precedent,” the booklet read.

It said that space travel does not absolve a Muslim of their mandatory prayers and fast during Ramadan “so it is important for the astronaut to know their timings”.

The booklet also advised that Maj Al Mansouri attempt to face Earth while praying but if it is too difficult, and he risks missing a prayer, he should pray in any direction.

Before praying, Muslims must perform ablution — a ritual of washing the hands, face, neck and feet.

The booklet said that the ISS provides water among other daily necessities but advised astronauts to take with a grain of sand or a stone that can act as a replacement for water in ablution when water becomes unavailable. 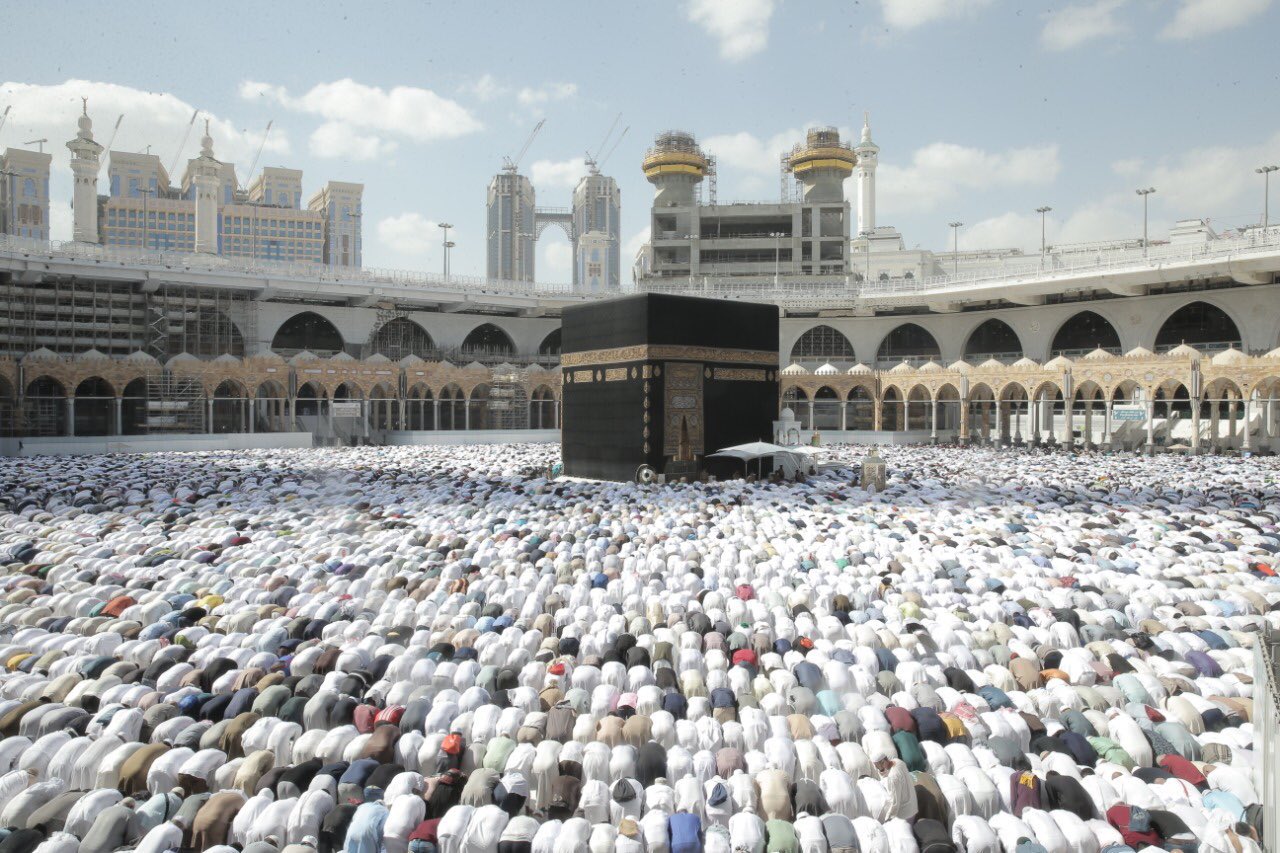