#61 [Permalink] Posted on 23rd May 2020 21:32
It would be interesting to find out if the adhaan could continue during quarantine. It was nice that the council suggested it and allowed it. No harm in taking initiative in asking if it could be continued after completion of Ramadhan until ppl are allowed back into the masjids.
report post quote code quick quote reply
+0 -0Agree x 1
back to top
Love all despite, age, religion, race, culture, gender, status, and wealth. Discrimination does not exist in Islam 💖
View Profile Block User

Many cities across the UK witnessed the adhan being publicly called from the masjids during the last few days of Ramadan. Many councils allowed the call to Salah to be given from masjid rooftops, primarily as a consolation for the Muslims who were unable to attend the masjids during Ramadan due to lockdown restrictions.

Inevitably, people are going to react to this with different considerations and perspectives, and they are perfectly entitled to express their opinion.

However, when taking to social media to correct what one views as wrong, there is never justification for arrogance and contempt of others. Enjoining the good and forbidding the evil should never become a pretext to look down on others and scorn people who frankly do not deserve it in the slightest.

In the context of this public adhan, some individuals took to social media to spotlight the "hypocrisy" of masjid committees who selected young muadhins with sweet voices for this publicised adhan, whilst for the past few decades, "local pensioners" who can't even pronounce the letters properly have been fulfilling this duty.

To speak so condescendingly of muadhins who have been selflessly waking up an hour or so before Fair Salah, come rain or shine, winter or summer, open the masjid and deliver the adhan, and referring to them as "unworthy ignorant" people is not acceptable under any circumstances.

These individuals deserve nothing but our gratitude and respect for what most of us would not be able to commit to, even for a few days. As for incorrect pronunciation of the words of the adhan, this is an area imams should address in a balanced, tactful manner and they should actively take time out to teach muadhins the correct Sunnah method of giving adhan.

It's very easy to lament and rant on Facebook; real grassroots level work to teach people the basics of the Deen is what really counts and what requires sincerity and perseverance. However, the latter doesn't do anything to boost one's public profile or attract likes on social media, because it's behind closed doors, so it's not surprising that it is disregarded.

Finally, the way we address issues is not to be taken lightly. Even the best of points can result in negativity when the delivery is inappropriate or out of proportion, let alone when the point itself is incorrect.

May Allah grant us humility, protect us against contempt of others, guide us all to the truth and enable us to think before we speak. Amin.
report post quote code quick quote reply
+2 -0Like x 2Ameen x 2
back to top
Rajab
View Profile Block User

Not yesterday though, I heard the Adhan yesterday in the garden but from inside the Masjid.

However, seeing this, perhaps it's been brought back by public demand or the they asked for it to continue for a few more days, Allah knows best.

This is from a neighbouring Borough of East London 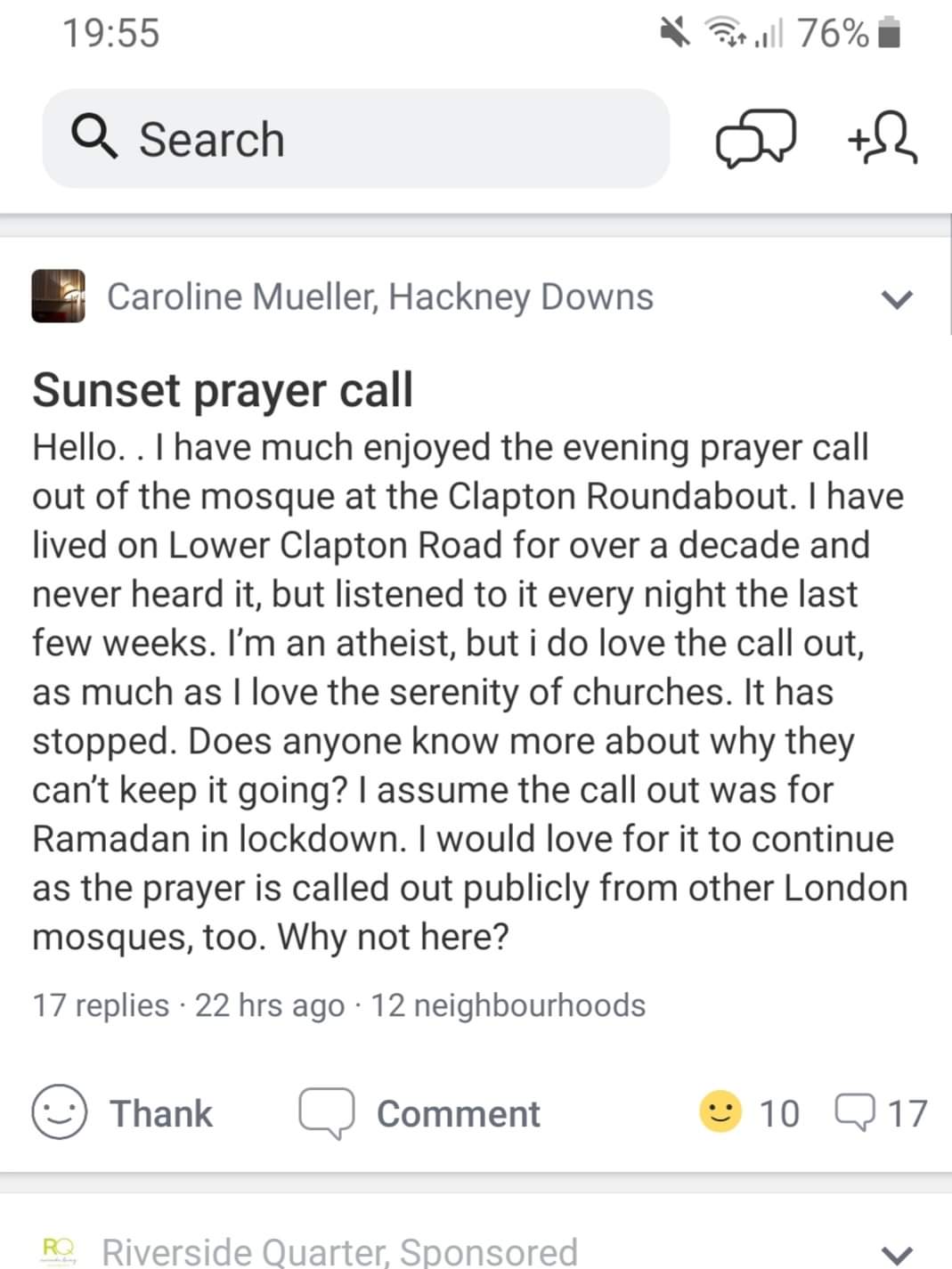 Downloads: 2
[96.89 kB]
report post quote code quick quote reply
+1 -0Informative x 1
back to top
Actions are judged by intentions, so each man will have what he intended.
ابو محمد