Forum Index » Sharing & Voicing  » People's SayAge of Aisha (ra) at the time of her marriage ?
Forum Menu - Click/Swipe to open
Show Forum Menu
Recent Posts
02JULY2020: Hagia Sophia, Constantinople
13 mins ago by Muadh_Khan
Islam in africa
16 mins ago by Muadh_Khan
Mufti Ismail Menk
6 hours ago by xs11ax
Ertugral, Dramas, Islam through TV
7 hours ago by DawudIsrael
Is your Government Islamic?
17 hours ago by Muadh_Khan
Virtues of Durood Sharif
17 hours ago by abu mohammed
The Ruling on saying Jummah Mubarak
18 hours ago by Moonlight
Sisters Online Tajweed Course
21 hours ago by Darulilm2018
The History of Islam
21 hours ago by Darulilm2018
Track & Trace
22 hours ago by Moonlight
Recent Top Rated Posts
+8 - Re: Mufti Ismail Menk
by Yasin
+5 - Re: Makkah News and Updates
by abu mohammed
+5 - Egypt vs Turkey: War Alert
by Muadh_Khan
+5 - Re: Just remembered...
by Moonlight
+5 - Re: Osama Bin Ladin "Shaheed" by Imran Khan
by bint e aisha
+5 - Re: On Kashmir
by TechMan
+4 - Re: Ertugral, Dramas, Islam through TV
by Abu Suliman
+4 - Re: China vs India 2020: Ladakh and Sikkim
by bint e aisha
+4 - Re: 22MAY2020: Plane Crash Karachi
by Intrepid
+4 - Re: Exhibit A: Devoid of Context and Background
by Moonlight
Top Members
Forum Menu
Search Forums Memberlist
▼
Statistical Pages
» Recent Replies » Most Appreciated » Popular Threads » Polls / Surveys » Top Rated Posts » Worst Rated Posts

Age of Aisha (ra) at the time of her marriage ?

You have contributed 10.0% of this topic

There's this view by a few brothers and brother Tripolisunni in this thread :


Then there is this view by Shaykh Faisal :

Quote:
Aisha was not an could NOT have been 9 years old. Here is the hujjah (evidence from Quraan and Sunnah):

The Age of Hazrat Aisha رضي الله عنه when she married
What was the age of Aisha at the time her marriage to Prophet Mohammad was consummated?
[submitted per Shaikh Abdullah Faisal]
[7.16.11]

In re: the notes from the halaqa by Shaikh Faisal on 7.13.11, "The Slander of Hazrat Aisha رضي الله عنه," Shaikh Abdullah Faisal submits the following information in support of her proper age at the time of her marriage, which refutes the age that the kuffaar like to propagate ...

Prophet Mohammad's youngest and only virgin wife is Aisha (Aysha or Ayesha), the daughter of his closest companion. Her age at the time of marriage is uncertain. According to some narrations, she was 9 years old. Because she could have been as young as 9 years old, these days, some haters of Islam today say that Prophet Mohammad (pbuh) was a pedophile. However, according to alternative methods of calculating her age, she could have been 12 – 18 years old. What is certain is that he did reach her puberty and she was very happy in her marriage.

Most of the Hadith narrations mentioning her age was nine are reported through Hisham ibn Urwa while living in Iraq, where Hisham ibn Urwa is reported to have relocated after living in Madinah for seventy-one years. It is reported in one of the most well known books on the life and reliability of the narrators of the traditions ascribed to the Muhammad reports that Yaqub ibn Shaibah said, “narratives reported by Hisham are reliable except those that are reported through the people of Iraq”. It further states that Malik ibn Anas objected on those narratives of Hisham, which were reported through people of Iraq. Another book on the narrators of the traditions of the Muhammad reports that when he was old, Hisham’s memory suffered quite badly.

We find evidence in both Hadith books and history books that indicates Aisha must have been older than nine when she got married:

According to a hadith in Bukhari and Muslim, Aisha is said to have joined Muhammad on the raid that culminated in the Battle of Badr, in 624 CE. However, because no one below the age of fifteen was allowed to accompany raiding parties, Aisha should have been at least fifteen in 624 CE and thus at least thirteen when she was married following the Hijra in 622 CE.

Ibn Hisham’s version of Ibn Ishaq’s Sirat Rashul Allah, the earliest surviving biography of Muhammad, records Aisha as having converted to Islam before Umar ibn al-Khattab, during the first few years of Islam around 610 CE. In order to accept Islam she must have been walking and talking, hence at least three years of age, which would make her at least fifteen in 622 CE.

Tabari reports that Abu Bakr wished to spare Aisha the discomforts of a journey to Ethiopia soon after 615 CE, and tried to bring forward her marriage to Mut`am’s son. Mut`am refused because Abu Bakr had converted to Islam, but if Aisha was already of marriageable age in 615 CE, she must have been older than nine in 622 CE.

Tabari also reports that Abu Bakr’s four children were all born during the Jahiliyyah (Pre-Islam Period), which has ended in 610 CE, making Aisha at least twelve in 622 CE.

According to the generally accepted tradition, Aisha was born about eight years before Hijrah (Migration to Medina). However, according to another narrative in Bukhari (Kitaab al-Tafseer) Aisha is reported to have said that at the time Surah Al-Qamar, the 54th chapter of the Qur’an , was revealed, “I was a young girl”. The 54th Surah of the Qur’an was revealed nine years before Hijrah. According to this tradition, Aisha had not only been born before the revelation of the referred Surah, but was actually a young girl, not even only an infant at that time. So if this age is assumed to be 7 to 14 years, then her age at the time of marriage would be 14 to 21.

From what I ve heard this is not the opinion of majority of the ulema. I think this was refuted in that same thread itself or in another thread.

If you actually go through the thread tripolisunni was adamant to prove that Aishaرضي الله عنه's age was indeed 9 at the time of marriage.
report post quote code quick quote reply
No post ratings
back to top
umar123
View Profile Block User

Yes akhi that's what it seems and that's why I mentioned Shaykh Faisals view which is totally different.

What's the consensus of the ulema on this ?

For 1000s of years the marrying age of girls was very low across ALL cultures around the world. Its only been hardly a few decades since the marriageable age has been increased.


I believe that the age 9 is what most of the scholars agree upon.
report post quote code quick quote reply
+2 -0Like x 2
back to top
umar123
View Profile Block User

#7 [Permalink] Posted on 4th May 2014 16:10
These pathetic kuffar make me sick, they call us Muslims all sorts of names but don't look into the books of history and see what many of the previous prophets from the bible had and so on.

These kuffar pass laws to suit their fancy. They make things illegal and legal according to their desires. If one of them is a paedophile and wishes to have gay relationship, they will pass a law and make it legal and change the mind set of all these people as well as the age of consent. Year by year, their perversion grows and the age of consent gets lower. Soon this discussion will be futile!
report post quote code quick quote reply
+2 -0Like x 1Winner x 1
back to top
Actions are judged by intentions, so each man will have what he intended.
ابو محمد
View Profile Block User

Prof Jonathan Brown explains how marrying at a young age was common practice, so therefore no one in the past used the young age of Aisha RA at the time of marriage to attack Islam/ the Prophet salalhu alayhi wasalm, until in recent times. Search youtube for his lectures. He discusses more than once. You can search for "Why are you agitated about the Age of Hazrat Aysha?" to seen one video.
report post quote code quick quote reply
+0 -0Like x 1
back to top
View Profile Block User

A very good discussion. I haven't heard or read these kind of arguments before about this very important particular topic put forward by Brother Mansur Ma Sha Allah. Usually, our ulema have not responded in a high quality way in this regards as far as my knowledge is concerned.

Here is a screenshot at the end of the second part of the video where four European countries are listed with age of consent. 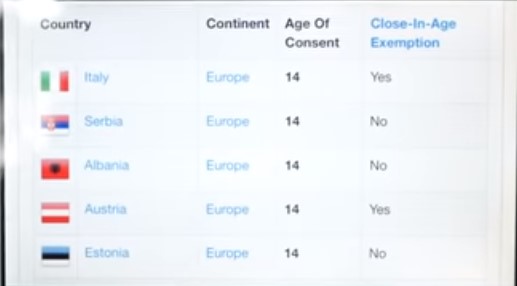 report post quote code quick quote reply
No post ratings
back to top
The world does not forgive the weak.

Post New Topic
You are here: Forum Index » Sharing & Voicing  » People's SayAge of Aisha (ra) at the time of her marriage ?
###
Award Rep
Award reps to ... for this post