There is a huge difference between humans and machines.

Humans have emotions. Machines have not.

Islam means submission to the Will of Allah. Prophet Muhammad SAWS and his Sahaba RA have shown us the correct way to do it.

wept. Some Sahaba RA saw this and were shocked. He replied (paraphrasing) "It is because the mercy in heart bestowed by Allah". However, wailing and screaming is not allowed when one's loved one has passed away. Weeping silently is the demonstration of emotions within the limits of Shariah. Screaming at some one's death is exceeding the limits.

When the son of Sayyidina Abu Bakr RA said to him after embracing Islam that at (Badr or Uhud) when he confronted and saw Sayyidina Abu Bakr RA (his son was a kafir at that time) he spared him because he was his father. Sayyidina Abu Bakr RA responded at that (paraphrasing) "If I would have seen and confronted you then I would have immediately killed you". This is because our love and hatred and every emotion is and must be for the sake of pleasing Allah. The enemy of Allah is enemy of a Muslim as well even if it is his kin or blood relation. Love for one's family is natural and a part of deen. However, this love must not exceed to the extent that we tolerate breaking Shariah rules by our family or ourselves indulge in haram activities to please our family and or to fulfil their wrong wishes (like earning haram money to buy things for spouse and kids and other family members and friends).

Edited: Fabricated story about son of Sayyidina Umar RA removed. May Allah have mercy on an ignorant fool like me who posted without confirming.

Islam is our way of life in every aspect. So much so that even the manners of sneezing and spitting are told to us by our Master Sallallahu Alaihi Wassalam.
report post quote code quick quote reply
+1 -0Winner x 1
back to top
The world does not forgive the weak.

You can be practical while being emotional. If someone's child suffers of course they will be emotional but they need to still be practical and get help.

report post quote code quick quote reply
+1 -0Winner x 1
back to top
There is no Plan B!

Can you please share the source of this narration? As far as I have read, his son only consumed nabeedh and got intoxicated unintentionally, but I have not read the other part about his death.
report post quote code quick quote reply
+1 -0Like x 1
back to top
bint e aisha
View Profile

I heard this incident from my uncle in the manner I wrote it here. Following are the possible sources I could find with a bit of change of words but same result i.e. his son's death at the end. This narration doesn't have strong riwayah. So it is considered a historical incident.

I don't know whether the links I have just posted reliable enough or not. My apologies in advance if these links are not enough.
report post quote code quick quote reply
No post ratings
back to top
The world does not forgive the weak.

I request everyone to read the whole article and if not, just these lines

Suddenly I heard explosions and went outside the mess, and asked people what was going on. Someone said that it must be practise somewhere. That was when I saw an Israeli aircraft attacking, very low from south to north, coming in towards the runway. It was a Super Mystére.

‘My first instinct was to run towards a ditch, but as soon as I got there I said to myself, “what am I doing here like an idiot?”

‘By this time mechanics started coming back after running away as the first bombs fell. That was when I took off in an available MiG-17F. 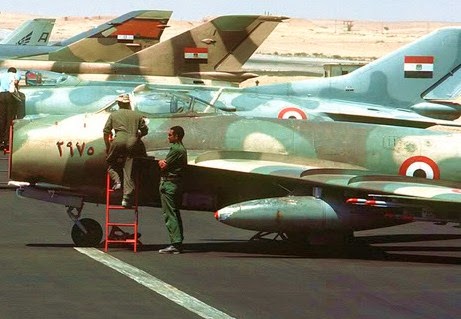 I didn’t even check if it was armed, but only asked if it had been refuelled. I took off on a sub-runway. By that time, Mamdouh Taliba landed. I didn’t have any plans, only to try and defend the airfield. Once I was up in the air I could see the smoke from other airfields which had been attacked. I hadn’t even cleared my take off with the control tower, I just took off. Nor did I have any idea what the rest of the squadron were doing. Then I saw something flying very low. It was a Mirage going west to east, so I half rolled in behind it. It was probably doing a reconnaissance as it was on its own and was not attacking targets on the ground. As I followed it I tried to load [cock] my guns three times, but my MiG- 17 was too slow to keep up and after a while the Mirage just flew off. Of course I was angry and frustrated because I was unable to shoot down that Mirage. There was a switch in the cockpit that changed the armament from rockets to guns. And I wasn’t the only pilot to make the same mistake. Hisham Said Abdu, who was another instructor, did the same thing.

‘Almost immediately after that I saw something else very low with a long exhaust of smoke. It crashed into the Suez Canal. I thought it might have been one of my colleagues but in fact it was probably a SAM. Then, I landed safely...

P.S: The last line about SAM means that the Egyptains were so hysterical and panicked that they were shooting their own planes with their own SAM (Surface to Air Missile). Earlier, is account of a pilot who just takes off without even checking if he has any ammunition!

This is not being emotional, this is being hyesterical

report post quote code quick quote reply
+3 -0Winner x 1Informative x 2
back to top
There is no Plan B!

#8 [Permalink] Posted on 6th September 2019 19:08
Jamal Abdul Nasir instilled ‘emotions of Arab nationalism’ not only in Egypt but the entire Arab world through his very impressive broadcasts from ‘saut ul Arab’ صوت العرب , created a kind of hysteria in all the Arab lands about ‘Arabs being a superior race and culture’. In his enthusiasm about proving Egypt to be ‘heir’ to a great civilisation, he called Egyptians the ‘heirs of pharaoh’. His daily broadcasts were full of emotional outbursts against Israel based on empty rhetoric, while Israelis were silently preparing to inflict the most painful punishment on them, with one of the most humiliating military defeats in the history of modern wars.

Doctors daily treat patients, delicate children as well as the miserably old, they have to operate upon them, their hearts is full of mercy for them but their training does not allow their mercy to compromise on their duty to perform the procedure.

To be emotional is a normal human behaviour, to keep emotions under control of logic and to keep logic subservient to sharia is the character of a Momin.


JazakAllah brother its much clear now.

But one thing you mentioned about doctors. Here in NHS apparently you are not supposed to see or operate your near or known ones. As they say you end up in overdosing etc because of your underlined care/concern as a family member or friend.

Doesn’t it say, doctors are not emotional as the patients are strangers and not “their” own people.
report post quote code quick quote reply
No post ratings
back to top
Muslimah S
View Profile

#12 [Permalink] Posted on 9th September 2019 01:02
I am so glad whenever i ask i get a multi dimensional answer as a whole, which covers many other aspects too Alhamdulillah. Thank you so much once again.
report post quote code quick quote reply
+3 -0Like x 3
back to top
Muslimah S